Difference between Hemp and Cannabis

Key Difference: Hemp is a variety of the Cannabis plant and is derived from the Cannabis sativa L species. Hemp is popular due to the low tetrahydrocannabinol (THC) level in the plant, which makes it useless as a psychoactive drug. Cannabis is a plant that is native to Central Asia and South Asia and is found in three major species: Cannabis sativa, Cannabis indica and Cannabis ruderalis. It is most sought after for its psychoactive properties and is used as a recreational drug.

Cannabis is a flowering plant that is commonly known by its street name marijuana or weed. This plant is popular for its psychoactive nature and its ability to intoxicate a person. Weed and all its variants are banned in many countries such as the United States and the United Kingdom. Hemp is actually a byproduct of one of the species of Cannabis and is different from the other plants.

Hemp is a variety of the Cannabis plant and is derived from the Cannabis sativa L species. The plant is similar in resemblance to marijuana with a significant different. Hemp is popular due to the low tetrahydrocannabinol (THC) level in the plant, which makes it useless as a psychoactive drug. The low TCH-level does not allow a person to become intoxicated. Some strains can be scientifically altered to produce higher levels of TCH; however they will differ from Hemp in appearance. Hemp has been used by many civilizations in the past 12,000 years.

The top producer of Hemp is China, while the top importer is the United States. Due to Hemp’s association with marijuana, many countries such as the US have not approved the production of the plant. Though some states have passed laws allowing acquiring hemp license, production has not yet begun. Hemp is one of the fastest growing plants and is least demanding during growth; they require little to no insecticide and they grow without excessive environmental impact.

Hemp is used in almost all forms. Hemp seeds have been promoted as a health food, which can be eaten raw, grinded into flour or turned into milk or oil. Hemp is high in minerals proteins, omega-6 and amino acids. Hemp is also commonly grown for its fiber, which are used to produce rope, fabrics, canvas, sails, etc. It is also used in construction material as an insulating material, for plastic and composite materials, paper, jewelry, cordage (rope for sailing), animal bedding, water and soil purification, weed control and biofuels. 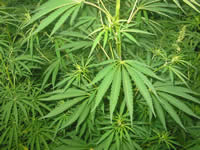 Cannabis is an annual, dioecious, flowering herb and is grown in warm, moist and damp places, compared to hemp which can be grown anywhere. They are also high in a toxin called as tetrahydrocannabinol, which is known to cause psychoactive effects in a human body, similar to alcohol, heroin and other drugs. The plant is known to produce hallucinogenic or psychedelic properties and is also known to affect intelligence, memory and respiratory functions after prolonged usage. Cannabis has also been proven useful in the medical field for relieving nausea, vomiting, and pain, creating hunger in patients undergoing chemotherapy and AIDS treatment and treating glaucoma.

Due to the misuse of Cannabis as a recreational drug, production of the plant has been banned in many countries including the United States. All forms of Cannabis, including Hemp have been banned. However, Cannabis has been given two forms of oral tablets available as prescription drugs to treat nausea and vomiting related with chemotherapy. It is also used in many religions as an aid for divination.