Difference between Hip Hop and Rap

Key Difference: Hip Hop genre consists of a stylized rhythmic music that is accompanied by rapping, a rhythmic and rhyming speech. Hip Hop music that has evolved into a Hip Hop subculture is also associated with rap and R&B. Rapping is often the lyrical part of hip-hop and is also known as emceeing, MCing, spitting beats or rhyming. It is lyrics or poetry that is performed to a beat, most commonly a 4x4 time signature.

Hip Hop and Rap music are actually interrelated, while Hip Hop refers to a genre of music and the way the beats are played, rap is actually a style of singing or lyrics that accompany a beat. Due to rap being incorporated in hip hop music, it is considered synonymous with the genre, but they differ from each other in origins.

Hip Hop music that has evolved into a Hip Hop subculture is also associated with rap and R&B, though now they are considered as different genres in themselves. This genre consists of a stylized rhythmic music that is accompanied by rapping, a rhythmic and rhyming speech. It is considered to have key stylistic elements such as, MCing/rapping, DJing/scratching, break dancing, beat boxing and graffiti writing.

The culture hip hop started in 1970s, when block parties started taking place in the streets of Bronx, New York. These parties included loud music with a heavy Jamaican influence. It set the stage for the development of Graffiti, raping, DJ-ing, scratching and B-boying. It is believed that hip hop was born to counter the constant clash between various gangs in New York.

According to website archive.org, the term ‘hip hop’ is credited to Keith Cowboy, a rapper with the Grandmaster Flash and the Furious Five. It is believed that the term was created when Cowboy was teasing his friend who had just joined the U.S. Army, by repeating the words hip/hop in a musical tone mimicking the sound made by the soldiers’ boots during marching. Cowboy later worked the "hip hop" cadence into a part of his stage performance.

The music hip-hop has a heavy influence of instruments such as drums, synthesizers, base and turntables in a 4/4 time signature and is usually accompanied by a rapping or artists speaking in rhymes. Hip hop lyrics are usually related to a certain issue that is currently present in the society or the singer’s standpoint on political or social problems. Hip hop lyricists incorporate meaningful lyrics into their hip hop songs as ‘a capella’ free verse with certain rhymes, or as powerful phrases with accompanying beats. Hip hop in dance form includes styles such as freestyle, break dancing and locking and popping. 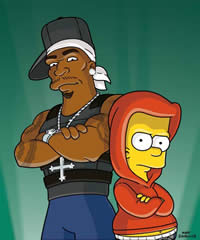 Rap is also a genre, but is often combined with hip-hop. Rapping is often the lyrical part of hip-hop and is also known as emceeing, MCing, spitting beats or rhyming. The book How to Rap by Paul Edwards breaks down rapping in terms of content, flow (rhythm or rhyme) and delivery. It is lyrics or poetry that is performed to a beat, most commonly a 4x4 time signature. Rapping is considered as a main ingredient of hip hop music and reggae, but it can be dated back to days even before the invention of these two genres. Rap can be incorporated with almost any genre including jazz, alternative, and rock. Rapping is also a part of Kwaito music, a genre that originated in Johannesburg, South Africa.

Rapping is commonly used to express feelings or anger over a person issue that the singer may have, or it could also be about their views over society or politics. Many singers such as Eminem uses rap lyrics to address his political and societal issues. The word rap is derived from the “repartee’, meaning “quick speech.” Another mean of the word ‘rap’ is “to hit.” ‘Rap’ was also used in African American dialect of English during the 1960s meaning "to converse.”

Rapping can be traced all the way back to Africa and has roots in African tribal music. Even before the birth of hip-hop, reggae and other genres associated with rap, rap was used by the griots of West Africa to tell stories rhythmically over drums. Even today, rapping involves drum beats and also incorporates other instruments such as beat boxing, synthesizers, table turners, etc. The rappers usually memorize the lyrics before performing or improvise their lyrics during performance.