Key Difference: The HTC Windows 8X sports a 4.3- inch S-LCD2 capacitive touchscreen that provides a pixel density of 342ppi. The screen is protected using gorilla glass 2, which makes it pretty durable and less prone to scratches. The phone is pretty slick and slim, weighing only 130 grams with the battery. The LG Optimus G features a 4.7 inch screen and runs on Android 4.0 (Ice Cream Sandwich). In terms of hardware, it has a Qualcomm Snapdragon S4 Pro APQ8064, 1.5 GHz quad-core Qualcomm Krait with 2 GB RAM. 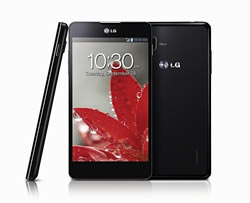 The LG Optimus G features a 4.7 inch screen and runs on Android 4.0 (Ice Cream Sandwich). In terms of hardware, it has a Qualcomm Snapdragon S4 Pro APQ8064, 1.5 GHz quad-core Qualcomm Krait with 2 GB RAM. It has a 13 MP or an 8MP primary camera, which is dependent on the market. It has a 1.3 MP secondary front camera. It is available with a storage capacity of 32 GB. It will have 4G and NFC capabilities.

The phone can be identified by the glittery backside which makes the phone appear trendy.  However, the back panel is not removable, which may be a downside for some, as this means that the battery will not changeable. The phone has also been criticized for being a little on the heavier side.

The LG Optimus G features Smart Screen that keeps the screen on if the phone detects the user's eyes looking at it. It also allows users to choose the phone's default font and font size, change how long the capacitive keys backlight stays on, and customize the events that trigger the notification light to flash. The phone also features QSlide apps which include a web browser, Memo pad, Calendar, Calculator and a Video player. These allow the users to run two of these QSlide apps simultaneously with a slider allows user to focus on one of them.

The information for the detailed table about the two phones has been taken from HTC website, guardian.co.uk, theverge.com, engadget.com, digitaltrends.com and GSMArena.com.