Difference between IMAP and POP3 protocol 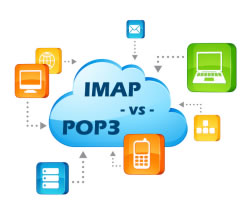 IMAP stands for Internet Message Access Protocol. IMAP was originally developed in 1986 at Stanford University as a competitor to widely popular POP. It allows accessing and editing the contents of the mailbox in real time. One can easily open mails and also form folders to store the mails. If the user wants, then he can also delete the mails from the server. Thus, the messages are saved and stored on the server. It provides greater functionality to the user by being a two way protocol. All these functionalities are provided by the latest version of this protocol i.e., IMAP4.

The mails are stored on a remote mail server. This feature puts a limitation on the mailbox size which depends upon the settings by the email service.

POP or Post office Protocol is also a type of email protocol. It is quiet different from IMAP as it has been devised for offline reading. The first version of POP was introduced in 1984 and later in 1985, POP2 was introduced.

The third version of POP is POP3. Basically, it creates local copies of emails and then deletes the original emails from the server. The mails can only be read from that specific computer only on which the mails were copied. Unlike IMAP, POP3 sets no limitation on the mailbox quota. However, it is limited to only one connection at a time. POP4 adds some functionality to POP 3 while maintaining the uncomplicated ease of use design of POP3.

The basic difference between the two protocols is the mode of access. However, Offline mode is now supported by IMAP4 version of IMAP.

Comparison between IMAP and POP3 Protocol: