Difference between IMAP, POP3 and SMTP

Key Difference: IMAP, POP3 and SMTP are three different protocols that deal with emails. IMAP and POP are used to read mails from a remote server. On the other hand, SMTP is used for sending emails. IMAP is more advanced protocol than POP3. 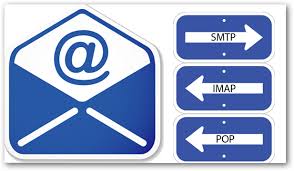 IMAP stands for Internet Message Access Protocol. It is used for retrieving emails from a mail server. In a IMAP set up, the mails are stored on the mail server. This gives the advantage of accessing the emails from multiple locations. The user can delete or leave the mails in mailbox after reading them. It also supports offline mode, which means that changes that are made in the absence of internet gets reflected after the reconnection with server. It can also work alongside POP.

POP stands for Post Office Protocol. It is also used to retrieve mails from a mail server. However, unlike IMAP it downloads the files to the local computer and the mails are generally deleted from the server. Thus, very little space on server is required.  POP3 is the third version of this protocol. It has been designed to support offline mail processing. It lacks advanced collaboration features like calendaring, contacts and tasks.

SMTP stands for Simple Mail Transfer Protocol. It is used for sending emails. It can be used by a client to send emails to a server or by a sever to send it to another server. It uses TCP port 25. It is a connection oriented and text based protocol. It sets the communication rules for the servers. There are certain ways to handle errors by using this protocol. In a typical scenario of SMTP transaction, a server identifies itself and declares the kind of operation it wants to operate. The other server authorizes the operation and finally the message is sent. These days, a slightly updated version of the SMTP protocol called ESMTP is being used by the servers.