Difference between Kathak and Bharatnatyam Dance 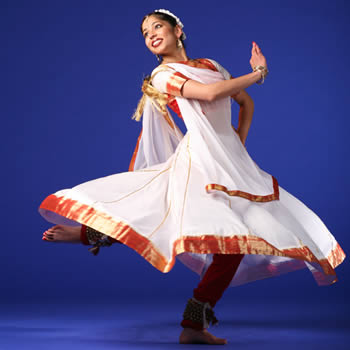 Kathak and Bharatnatyam are two different schools of dances. Both are forms of traditional dance that originated in India and have garnered popularity in India and outside. They started out as humble dances but have now developed into a movement with their own school. They are now taught not only in India but worldwide.

The primary difference between Kathak and Bharatnatyam Dance is the fact that Kathak originated in North India, while Bharatnatyam comes from the South, specifically from what is now the state of Tamil Nadu. Kathak, on the other hand, is believed to have originated in Varanasi and spread north. Today, there are three main schools, i.e. Gharanas of Kathak: Jaipur, Benares and Lucknow, named after the regions where the three distinct forms evolved.

Both dance forms started as a way to honor the gods, in fact they were performance only at temples or religious functions. Eventually, they evolved and started being performed at court and in front of audiences. While Bharatnatyam has more or less stay the same or at least similar over the years, Kathak has varied a lot. Till date Bharatnatyam is endued with religious themes and spiritual ideas, particularly of Shaivism, as well as of Vaishnavism and Shaktism. However, Kathak deviated from this into a form of pure story telling. It started by telling stories of the gods, such as storied from Ramayana and Mahabharata, but then started tells other stories as well purely for entertainment factor. The main reason for this that while Bharatnatyam continued to be performed at temples, Kathak was adopted by traveling bards and storytellers who travelled from village to villages telling stories. 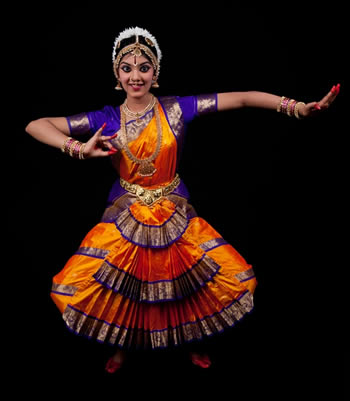 There was eventually a ban in 1910 on all Indian classical dances. Indians cried out against this ban afraid that their identities were being repressed. Afraid that these dance forms as well as other traditional practices would die out, a massive revival was put into practice eventually leading these dances back into popularity, one that steadily increased after Indian Independence.

In terms of the dances themselves, they differ in some significant manner. whereas in bharatnatyam the focus is on the hasta mudras, i.e. hand formations as well as facial expressions.

The costumes that are worn for the two dance styles also differ. In Bharatnatyam, the outfits are more intricate and heavy. Most women dancers wear form fitted silk saris that are pleated in the front to look like a large hand fan during the dance. These are often paried with heavy traditional jewelry, with full make up, and Ghungroos. In Kartak, the dresses are less complicated withless heavy jewelry and make up, but are paired with Ghungroos. A dancer may wear a sari or a long skirt with a blouse and an orhni (scarf). In the Lucknowi Kartak, women often wear a long skirt with close fitting churidar pyjamas and sometimes a long coat covering hands and the upper body, and a head covering orhni. Men may wear a dhoti paired with a silk scarf. The chest may be bear or covered with an open vest jacket. Also, men kartak dancers are quite common, whereas they are less common in bharatnatyam which is more commonly practiced by women.

Comparison between Kathak and Bharatnatyam Dance: