Difference Between Kitten and Cat

Key Difference: Cats are small, furry, domesticated and carnivorous mammals, while kittens are juvenile cats. Cats and Kittens differ greatly in behavior. While cats are more patient and require less attention, kittens require constant attention, need to be trained and have to be played with. Kittens require a high-calorie diet and require foods that are high in protein, along with mother’s milk. Cats require a low-calorie, high protein diet, along with minerals and a constant supply of water.

Cats are small, furry, domesticated and carnivorous mammals, which make great house pets. Kittens are juvenile cats. Though kittens grow up to become cats, they are very different from cats at this age. 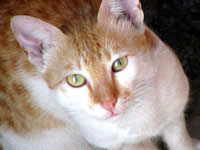 Felis catus or cats are small furry, nocturnal animals that are popular house pets, most popular due to their ability to get rid of rodents and pests, along with providing great companionship. Like other felines, cats have strong, flexible bodies with quick, sharp reflexes and retractable claws. They also have a heightened sense of sight and smell.

Kittens are juvenile, or baby cat. Babies of big felines are referred to as “cubs”, but for domesticated cats the term “kittens” are more popular. Kittens are born in an amnion sac in a litter of two to five. For the first several weeks, kittens are unable to urinate or defecate without stimulation from the mother; they are also unable to regulate their own body temperature and need to be kept warm by their mother. Kittens open their eyes after eight to ten days after their birth and have poorly developed retina. Kittens are considered as cats when they reach eight or nine months. 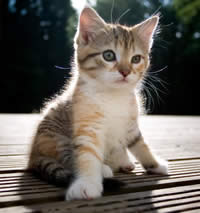 Cats and Kittens differ greatly in behavior. While cats are more patient and require less attention, kittens require constant attention, need to be trained and have to be played with. Kittens can blend easily with other animals and older cats as they are not viewed as a threat and also have not yet developed territorial behavior. In case of little children, a better option is a cat, as kittens may bite or scratch if they feel threatened or scared. Cats can also be left home alone for small periods of time, but kittens need to be under constant supervision.

Cats and Kittens also differ greatly in terms of their diets. Kittens require mother’s milk until they wean (approximately three to four weeks) as the milk has antibodies that are transferred to the kitten. Kittens without their mother’s milk show signs of malnutrition and may develop diseases. Kittens require a high-calorie diet and require foods that are high in protein. At about five months, kittens start hunting and stalking. Cats require a low-calorie, high protein diet, along with minerals and a constant supply of water. Cats also hunt and eat small animals and birds.

When considering for adoption, make sure to see if you can provide for all the needs of kittens. Kittens require as much patience, time and energy as a puppy and will also need to be trained. However, cats already come trained to use the litter box and the scratching post. Also when adopting a cat, you know exactly what you are getting as the cat has already grown into set characteristics and behavior, while kittens are still developing set skills.