Difference between Alligator and Crocodile

Key difference: Alligators are darker in color, nearly black with a u-shaped snout. Whereas, crocodiles are a light tan or olive green in color with a v-shaped snout that is longer and narrow in front. 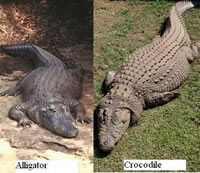 Most people confuse the alligators and crocodiles, as they are both huge, scaly lizards of prey. What people don’t realize is that while they are similar in some ways, they are two distinctively different, yet equally scary hunters.

Both alligators and crocodiles are members of the reptilian order Crocodylia, however they belong to different families. There are a total of 23 types of crocodilians (belonging to the Crocodylia order), including these two. Crocodilians date back 240 million years, that’s 65 million years more than the dinosaurs.

Crocodilians can live on both land and water, and can hunt quite efficiently on both. They can swim up to 20 mph (32 kph) and run up to 11 mph (17.6 kph). Crocodiles and alligators can hold their breath up to one hour, and their powerful tails helps them maneuver swiftly in water. They also have eyes atop their heads which able them to keep an eye out for their prey. Their pupils are vertical slits which are capable of expanding to catch more light, thus giving them excellent night vision. They also have a heightened sense of smell due to special organs in their snouts, and their small slit ears are sensitive enough to hear their offspring inside the eggs.

The crocodilians are superb hunters with teeth specialized for spearing. They eat about anything, including fish, turtles, monkeys and buffalo, usually swallowing them in large chunks or whole. Some crocodiles, such as the Nile crocodile, have even been known to eat humans. Also, crocodiles are famous for their temper and are considered far more aggressive than the alligators. Further differences between crocodiles and alligators include:

Your section on the reptiles jaw regarding the teeth is incorrect. Just flip them.