Difference between LAN and MAN 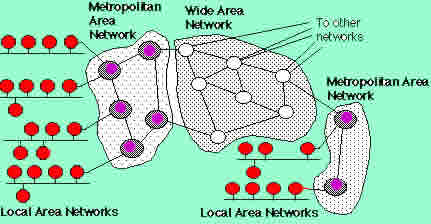 LAN stands for Local Area Network. It is a computer network that works within a relatively small area. One can find it confined to a school building or a small office. Most of the LAN networks connect computers like workstations and personal computers. There are numerous types of LANs. One of the important characteristic of LAN is that it should be able to provide high bandwidth, high speed and high capacity communication.

LANs can be structured by using various topologies. The topology can be of two types – physical and logical. In physical type of topology, the organization of wires is considered. On the other hand, in the logical topology the emphasis is on the logical behavior of the network. There are numerous addressing schemas like Unicast, Multicast and Broadcasting. Bus, ring and star are the most common types of topologies used by LAN networks.

MAN stands for Metropolitan Area Network. It is a computer network that interconnects computer within a city or a large campus. MAN differs from LAN as the network of LAN spans over a larger physical area than a LAN. However, it is smaller than a wide area network. Generally, MAN is owned and operated by a government body or a large corporation.

MAN networks are implemented by modern techniques like the fiber optic cable which is through subway tunnels. Implementation of MAN is done by using technologies like Asynchronous Transfer Mode (ATM), FDDI, and SMDS.

Comparison between LAN and MAN: