Difference between LCD and HDTV

Liquid Crystal Displays (LCD) and High-Definition TVs (HDTV) are two completely different things. While LCDs are a type of screen that has a significant advancement over old CRT models, HDTV is a format for broadcasting digital television. An HDTV provides better image quality and higher resolution, compared to its predecessor.

An LCD is type of television screen that uses liquid crystals sandwiched between two sheets of polarizing material. LCDs are used in TVs, computer monitors, clocks, calculators, cell phones, etc. LCDs provide significant benefits compared to CRTs and plasmas, such as they consume less power than both. Both CRTs and Plasmas are susceptible to burn-ins while LCDs are not. However, LCDs require a backlight as it does not emit light by itself. LCDs are also best to display in small sizes, anything bigger than 40 inches becomes expensive compared to plasmas. It also faces a dead pixel problem, where pixels can die causing a spot to appear on the screen. 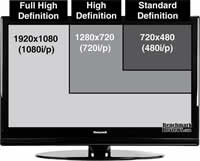 HDTV broadcasting format is an upgrade compared to the standard digital television. HDTVs are able to accept higher resolution and provide a better image quality compared to standard TVs. Prior to broadcasting being done in high definition or digital format, broadcasting was done in analog, where signals were transmitted through the air, cable or via satellite. This was succeeded by digital signaling as it provided better resolution, better quality, video could be progressive instead of interlaced (image is shown in lines of pixels), stations could multicast and digital TVs can support HDTV broadcasts.

HDTVs provide a better aspect ratio, better resolution and better frame rate, when compared with DTVs. However, in order for a consumer to receive high-definition TV, they need to have a station that broadcasts HDTV format, an antenna, cable or satellite service, and an HDTV set. HDTV sets are available that are already integrated with a digital tuner to receive HDTV, or a consumer can also go with a HDTV-ready set that does not come with a tuner but is HDTV compatible. HDTVs work with LCD screens, plasmas, LEDs, etc. Plasma screens work best when using on larger sizes.