Difference between iPhone and Smartphone

Key Difference: iPhone is the flagship phone developed and manufactured solely by Apple. The device operates on Apple’s iOS operating system and is currently in its 5th generation. Smartphones are any mobile phones that are similar to a mini computer. Smartphones offer a variety of features that allows advanced computing capability and connectivity. 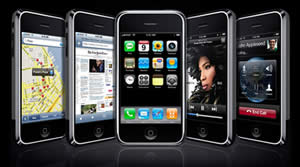 Smartphones and iPhones are two terms that actually go hand-in-hand. iPhones actually fall in to the smartphone category and fulfill the basic criteria of what a smartphone should be. iPhones are one of the most popular phones that are currently available on the market and is single-handedly providing competition to Android, Windows and many other operating systems available in the market. A smartphone is a phone that allows computing capabilities and has an operating system. The iPhones allows 3G, 4G, Wi-Fi and many other capabilities and runs on the iOS operating system, making the iPhone a smartphone. It is quite easy to get confused in all the technological terms which are constantly being simplified for the non-techies, but many people get caught up in the middle of the whole tech and non-tech language and end up becoming confused by various terms.

iPhone is the flagship phone developed and manufactured solely by Apple. The device operates on Apple’s iOS operating system and is currently in its 5th generation. The latest phone was the Apple iPhone 5, launched on September 21, 2012. The first generation or the original iPhone was announced by the company in June 2007. The iPhone became an instant success with many techies as it was technologically advanced as well as aesthetically appealing. The idea of a multi-touch screen that allowed users to directly input data on to the screen, thus eliminating the need for mouse, keyboard or keys, was conceived by then Apple CEO, Steve Jobs. He revolutionized the phone. Another new feature that was introduced by the phone was the Apple Store, an online application distribution platform that allows users to directly purchase and download applications on to the phone. The iPhones have been praised for their looks, design, performance and their tight security; however, they lack customization ability, they are strict in terms of guidelines, they are quite expensive and even if damaged, repair is quite costly.

Apple can be considered as one of the reasons that have boosted the popularity of smartphones in today’s society. Apple’s iPhones have started new trends and set many standards in the smartphone world. The company’s phones provide both aesthetic appeal as well as amazing features that has garnered many loyal fans for the company.

I am confused ,can anyone tell me which mobile is the best between iphone and smartphone

I am confused ,can anyone tell me which mobile is the best between iphone and smartphone

What is the size difference? I need a case for my new Smartphone, is the Smartphone compatible with the iPhone case? The sizes seem to be the same online, but are they?

Thanks was very helpfull