Difference between Cocoa and Cacao

Key Difference: Cocoa and Cacao are similar because they both have the same history. The terms Cocoa and Cacao were originally interchangeable; however, these days are used differently. Cocoa is used to refer to the roasted and processed beans, which are used to create cocoa powder and chocolate. Cacao is used to refer to the unprocessed beans that removes the cacao butter from the seed and maintains the nutrients of the beans. 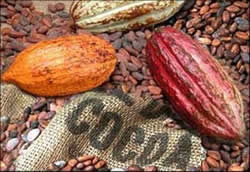 The term ‘cocoa’ and ‘cacao’ may seem quite similar and you’d be right they are. However, they are also very different from each other. The terms are often used synonymously to refer to the seed from which cocoa powder and chocolate is produced.  Although cocoa has been very popular, the term cacao has been gaining significance in recent times because of the shift to healthier foods. Let’s explain further.

The terms ‘cocoa’ and ‘cacao’ are actually similar as they both refer to the same tree that produces the cocoa or cacao beans. To understand this we will have to go back to the history of these beans. It all starts with the Theobroma Cacao. The Theobroma Cacao tree is a small evergreen tree that is part of the Malvaceae plants and is native to South America. Chocolate and other similar products have been dated back centuries where it was originally considered as the ‘Food of the Gods.’ The name of the tree itself is a generic name derived from Greek word ‘theos’ and ‘broma’, which can be roughly translated to ‘God’ and ‘Food’, respectively.  The term ‘cacao’ has been derived from the native name of the plant in indigenous Mesoamerican languages. Because of its popularity and significance, these beans have also been used as a currency.

Cacao has been related to the Olmec people, native to what is now Mexico. It is considered to the closest pronunciation to the original name of the plant. As time went by, the production of this cacao tree was passed on to the Mayans and the Spanish. It is interesting to note that in many other cultures, the term cacao is still used to refer to cocoa tree, cocoa beans and cocoa powder. Now, the term ‘cocoa’ is believed to be a rough translation or a spelling mistake that stuck. In English speaking countries, the term became widely popular than the original term and it has continued to be used since. So, according to this, the words cocoa and cacao refer to the same thing. There is absolutely no difference between the words rather than its spelling. 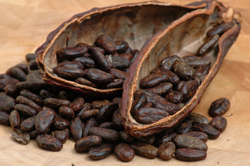 Now, we come to another twist in this exciting story about cocoa and cacao. The word ‘cacao’ has made a comeback. The word is popularly seen in whole foods centers and is being marketed as a healthy alternative to cocoa. These days it has become a sin to suggest that these two are similar or even the same. Cacao has become synonymous with the unprocessed cacao beans. This means when the Theobroma Cacao tree is harvested, the pods are removed from the tree. The pods are then further cracked open and the beans are removed. These beans are the cacao beans, which are then processed to convert into a cocoa powder after the cocoa butter is extracted from the beans. The processing removes vital nutrients and minerals from the cacao seeds.

Now, the term cacao has been reserved to be used as the original cacao trees, cacao beans and grounded cacao beans that are known as cacao powder. The cacao beans maintains the vital nutrients and minerals, while removing the unhealthy cacao butter through a cold-pressing process which only removes the butter making the cacao powder hydroscopic. The cocoa beans are used to refer to the roasted, processed beans that remove the vital nutrients and minerals and have retained much of the butter. Cocoa is considered as unhealthy and fattening, while cacao is a much healthier variant. Cacao is also replacing cocoa powder in baked goods and there are also chocolates that sell using the terms cacao rather than cocoa.