Difference between Liposuction and Lipolysis

Key difference: The terms liposuction and lipolysis are obesity related terms. Liposuction is a surgery carried out to remove the extra fat whereas; lipolysis is a method of hydrolysis of lipids.

Liposuction is a medical surgery; it evolves the work from the late 1960s from Europe. The invention of modern liposuction procedure is linked to the name of two Italian gynecologists, Arpad and Giorgio Fischer, who created the blunt tunneling method in 1974.

Liposuction is a surgery, wherein; the extra and bulky fat from body is removed by surgery treatment. The extra fat in the body is believed to create a imperfection in a person’s appearance, and it is also not good from health point of view. Hence, this fat is removed through surgery by consulting a doctor. 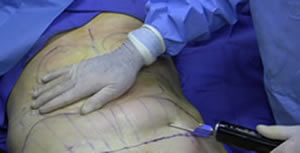 Liposuction is used commonly to bring body into proper shape. Those parts of body which become too bulky and heavy, because, of the fats formation are removed by extracting the fats by a proper and systematic surgery.

Liposuctions are of following types:

In organic chemistry, lipolysis means ‘the hydrolysis of lipids’. In lipolysis, there is a break-down of lipids, which are a form of proteins. It involves the hydrolysis of triglycerides, which gets converted into glycerol and fatty acids. 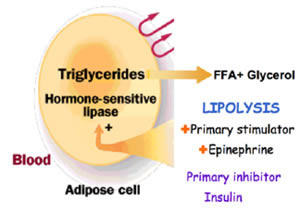 The glycerol and fatty acids obtained are then soluble in the blood. The hormones which carry out lipolysis are epinephrine, norepinephrine, ghrelin, growth hormone, testosterone, and cortisol. These hormones activate the adenylate cyclase, which results in the increase of production of cyclic adenosine monophosphate (cAmp). This also activates the protein kinase A, which further activates the lipases found in adipose tissue.

In lipolysis, the triglycerides are first carried to the appropriate tissue by blood. The triglycerides are present in low density lipoproteins, which undergo lypolysis by a cellular lipase, resulting into the glycerol and free fatty acids. These acids are then supplied to the other tissues along with the albumin. The serum albumin acts as a major carrier of free fatty acids in the blood. The glycerol thus obtained enters the blood-stream, and is absorbed by the liver and kidney. The liver and kidney then converts the glycerol into glyceraldehydes 3-phosphate (GA3P). This rejoins the glycolysis and gluconeogenesis.

Comparison between Liposuction and Lipolysis: