Key Difference: Love marriage is a union of two people who love each other prior to the wedding. Arrange marriage is when families of the couple choose suitable partners. 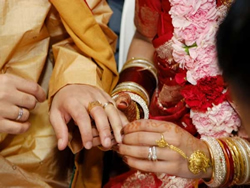 Marriage is considered as a sacred tradition where two people are joined to spend their lives together. They make certain promises in front of higher authorities, including God. There are two sides to marriages: legal and spiritual. The legal side includes a document stating the names of people getting married and is considered as a contract. The spiritual side includes acceptance in front of God of the responsibilities and duties that come with being married. There are two types of marriages that take place: Love Marriage and Arrange Marriage. See the difference between devotion and love.

Love marriage is the idea that marriage is done on the basis of affection, love, commitment, and attraction. In love marriage, the bride and the groom are in love prior to the marriage and agree to marry each other. It is a recent phenomenon based on the idea that marriage should be done for mutual love between two people rather than duty and honor. The idea has been become popular fast and has been associated with the Western world.  The idea of a love marriage was first expressed by Jean-Jacques Rousseau in his popular novel Julie, or the New Heloise, in 1761. However, love marriages that were not based on social position and wealth became widely accepted during the women’s movement in the late 19th century.

Arrange marriage is the idea that the ideal partner is selected by the family or community members. In an arranged marriage, families or community members would find suitable brides and grooms and pair them up. The paired up couples would have no option but to marry as it was considered their duty to honor their family’s wishes. During an arranged marriage, the bride and the groom are introduced to each other along with their families, where the marriage is discussed. Within a few days of that meeting, the families decide if they approve or reject the proposal. If the proposal is accepted, the bride and groom directly meet on their engagement and then their marriage. However, in modern times the bride and groom are allowed to talk to each other and meet each other without a family present in an attempt to get to know each other better. Factors that are considered during matchmaking in arranged marriages include Religion, caste, culture, reputation, wealth, the vocation of the groom, physical fitness and horoscope.

See: Difference between love and marriage 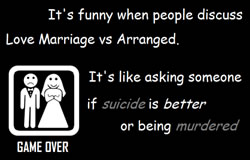 Although, arrange marriage has been considered as an Eastern tradition, arranged marriages were a part of the western cultures as well. Marriages in the UK and the US would happen with the families deciding a reliable suitor that had similar social status and wealth, who was then allowed to court their daughters. If the families and the daughters approved, the marriage was allowed to take place. With the growing popularity of love marriages, arrange marriages has taken the heat of being a more traditional approach towards marriage.

The eastern cultures believe that arrange marriages are important as marriage is not only a union between two people but also the joining of two marriages. The woman does not only marry the man but also becomes a part of his family as she lives with them. Hence, the family believes that they should choose the type of bride that has similar habits to the family that she is marrying into.

Love marriages are considered important from an individual point of view. People believe that instead of having to adjust with a complete stranger, they would rather marry and live with a person that they feel comfortable with. In an arranged marriage, the couple does not get a choice as the family decides all, while in love marriages it is being done at the concept of the couple who love each other and do want to spend their lives with each other.

Love marriages and arrange marriages each have been considered to have its own merits and flaws. People that are born in traditional households do not have an option and have to opt for an arranged marriage. In many traditional countries such as India and Pakistan, love marriage is usually frowned upon and even violence has occurred when couples choose to marry for love rather than for the honor of the family.

See: Difference between loving and being in love