Difference between Meat and Chicken

Key difference: Meat is a general term for animal flesh, whereas chicken is a very common type of poultry obtained from birds.

Humans are omnivorous in nature, and are known to enjoy their meat, poultry, fish, etc. since the prehistoric times. Meat and chicken, high in proteins, are popular and commonly consumed by people all over the world. Though their consumption varies widely according to the different cultural, religious or the economic conditions of the people. Different in their taste, look, and cooking method, this article further highlights the differences between the two sources of protein. 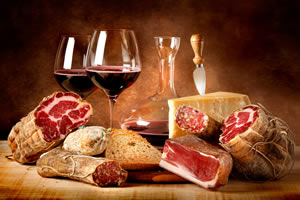 Meat is high in water and proteins. Although, it is edible raw, it is normally cooked, processed and seasoned before eating. Also, it is usually a part of a complete meal. Most often, the skeletal muscles and fats, the juicer and richer parts of an animal meat are used for consumption. However, the prime cuts of a meat are T-bone, sirloin and fillet. In order to enhance the taste even more, meat can be cooked in a variety of different ways. Meat can be cooked as steaks, in stews, and fondues. It can be grounded or be used in the forms of patties, loaves, sausages, or sauces. Also, depending on the pallet, meat can be smoked or cured; they are generally marinated and barbecued, or simply boiled, roasted, or fried.

In spite of the many different cooking methods, there are some traditional meat recipes that require raw beef, veal or tartare. At times, meat is also spiced or seasoned with other meat products such as sausages, etc. and is widely used in sandwiches such as ham, pork, salami, pepperoni, and pastrami, etc. However, before enjoying theses dishes, one should make sure that the meat is fresh, processed and safe to eat. Unprocessed meat is a major reason for concern as it is easily spoilt, and  if not cleaned thoroughly it can cause infection through bacteria and fungi present on the meat. Though, a common additive for both preservation and procession is adding sodium nitrite to the meat, it is also a source of health concern, because it may form carcinogenic nitrosamines when heated. 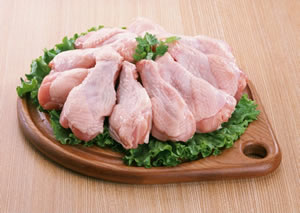 Chicken, on the other hand, is also a good source of protein, and is widely consumed by people all over the world. It is can be eaten as a side dish, main meal or be included in starters before the meal. Chicken is a type of poultry, which includes all kinds of birds such as pigeon, turkeys, etc. Breast, leg and wings are the three main edible components of chicken. However, it cannot be enjoyed raw, and is required to be cooked before eating. The bird size also matters such as small, medium or large.

Based on the different flavors and textures, chicken can be cooked in many ways. It can be made into sausages, skewered, put in salads, grilled, breaded, or used in various curries. Other common cooking methods are roasting, baking, grilling, and frying. Keeping up with the modern times, chicken is also deep fried and consumed as a fast food in the form of fried chicken, chicken nuggets, chicken lollipops or Buffalo wings. At times, chicken based on color is classified into white or dark meat.

Also, in most countries, chicken bones are used in cooking. Though the bones are perilous to health because of their sharp splinters, it can be used while cooking the chicken stock, which is simmered with vegetables and herbs. In the same way, raw chicken can be frozen up to two years without any change in flavor or texture, and can be cooked when required.

Comparison between Meat and Chicken:

Woww Lovely article on the differences