Difference between Meiosis in Plant and Animal Cells

Key Difference:  Meiosis is a type of cell division which reduces the chromosome number. The processes are quiet the same in plants and animals. However, in animals, it results into the formation of gametes which is a reproductive or sex cell. On the other hand, in plants it forms spores which further grow into gametophyte. Thus, in plants the gametes are formed by mitosis not meiosis, which fuse to form a zygote and then a sporophyte.

Meiosis is a special type of cell division which is found in sexually reproducing organisms. The process decreases the number of chromosomes by half in gametes in compared to parent cells which in return enable sexual combination.

Prophase I – synapsis takes places and after it, crossing over takes place. The chromosomes are thickened and they start travelling away from nuclear envelop. In Metaphase I, the tetrads are aligned at the center of the cell. In Anaphase I, the homologous chromosomes get separated. In Telophase I, the chromosomes continue to migrate towards the poles and finally two daughter cells with a haploid chromosome number are formed. In Prophase II, the nuclei and nuclear membrane gets separated. In Metaphase II, the chromosomes get aligned and tend to orient themselves towards the opposite poles. In Anaphase II, chromatid pair begins to move further towards the poles and finally in Telophase II, four daughter cells or gametes are formed.

During Meiosis I, a cell divides into two and in Meiosis II, a further division takes place resulting into a total of four haploid cells. 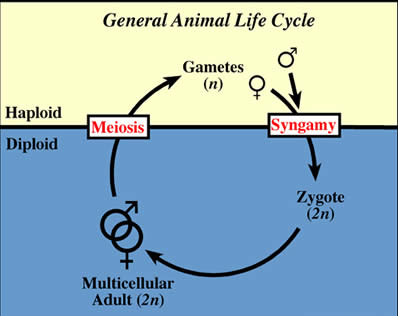 Meiosis in animals produce the gametes (sperms and eggs), whereas meiosis in plants produce spores. These spores develop into haploid gametophytes, which in turn form gametes through mitotic division.

In animals, these haploid cells produced by the process are usually smaller and also inconspicuous, whereas in plants, generally these cells are able to have their own kind of life. In animals, meiosis results into direct formation of gametes, whereas plants go through a sporic meiosis, in which they produces spores and not gametes. Firstly, gametophyte is formed by the mitosis process, which then forms the gametes.

Comparison between Meiosis in Plant and Animal Cells: