Key Difference: The Motorola Moto 360 has a 1.56 inch round bezel and is the flagship smartwatch by Google. LG G Watch R is a smartwatch by LG, powered by Android Wear. 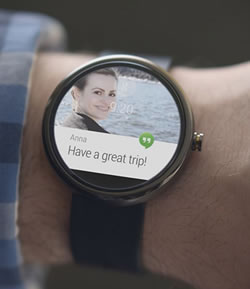 The future of smartphones is here in the form of smart wearables. These include watches, bracelets, etc. Motorola Moto 360 and LG G Watch R are two types of smartwatches that are currently available in the market. They are also two of the only round shaped smartwatches, with other the other companies sticking to a square shape for their device.

The Motorola Moto 360 has a 1.56 inch round bezel with the bottom bit slightly cut off in order to make room for the ambient sensor. The watch offers a resolution of 320 x 290 and comes with two types of bands: metal and leather. The screen is protected from scratches and bumps by Corning Gorilla Glass. The phone also allows personalized watchfaces, but from an option of 6 preinstalled ones. The device comes with IP67 rating, which means it can worn in the shower and can be taken for a swim for 30 minutes.

The device has a traditional crown, which can be pressed to turn the screen of and on. However, a person doesn’t have to use the crown and can simply turn their wrist or tap the screen to bring the screen back to light. Navigation also becomes easy with the Ok, Google voice assistance. The watch constantly listens for ‘Ok, Google’ and starts up the moment it hears those words. The user can then directly talk to the watch and ask it look up someone, message someone and even directions. Additionally, it can also dial a person but the user will have to pick up the phone in order to talk to the person.

Moto 360 has Bluetooth 4.0 Low Engery, 4 GB of internal storage and 512 MB of RAM and has replaced the standard Qualcomm Snapdragon with a Texas Instruments OMAP 3 chip. The battery is touted to run for approximately a day, but multiple benchmarks suggest that the battery only lasts around 15 hours or so, depending on usage. 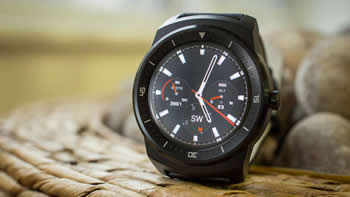 LG G Watch R is the successor to the LG G Watch, and leaving behind the square shape of the G Watch, LG has opted to offer the same round bezel as its rival Motorola Moto 360. The company touts itself to the first full round smartwatch, as Moto 360 loses out to a mere technicality of cutting off the end of their screen. The watch comes with leather band, which is removable. It comes with standard size bands, so normal bands purchased from outside can also be used.

The screen is 1.3 inches plastic OLED with 348ppi resolution. The LG G Watch R comes with superb 410 mAh battery that can last up to a day and a day and a half if used conservatively. It also has a IP67 rating, making it okay for the user to shower with it or swim with it for about 30 minutes. The bezel has numbers on the sides to make the smart watch more like a normal watch, but with a digital watchface, it makes the numbers on the side look slightly odd.

LG G Watch R has a 4 GB of internal storage, 512 MB of RAM and Bluetooth 4.0. It also includes sensors such as pedometer and heart rate, and uniquely a barometer. It is powered using a Qualcomm Snapdragon 400 processor. It does not offer wireless charging, but charges via metal contacts and a cradle or docking charge.