Key Difference: Mountain Climbing is a sport or hobby in which a person hikes or climbs a mountain. It is also known as mountaineering or alpinism. Rock Climbing is a sport that requires a person to climb up and down a rock formation or a rock wall. Rock climbing or scaling is a part of mountain climbing where a person may be required scale rocks to get a certain peak when climbing a mountain.

Outdoor activities such as climbing or hiking have been arranged in many rating systems and the most common one used is the Yosemite Decimal System. The activities have been divided into classes from 1-5 on the basis of difficulty and experience level required. Climber.org lists the five classes as: 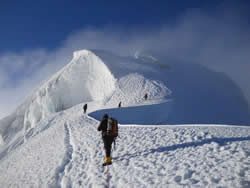 Mountain Climbing is a sport or hobby in which a person hikes or climbs a mountain. It is also known as mountaineering or alpinism. The term ‘alpinism’ is a European word that was derived in the 19th century to refer to climbing a mountain for the purpose of enjoying climbing. Mountain climbing originally began as a way to climb the highest mountain, reach the highest peak and go somewhere no one has gone before. This later branched into a sport and activity and has been categorized in to specializations that deals with different aspects of the mountain and consists of three areas: rock, snow and ice. All three requires a different skill-set, equipment, experience and athletic ability.

Depending on the range (snow, ice or rock), a climber would carry his equipment. Climbing in snow requires poles and the journey is commonly done by walking or hiking. It climbing is done on ice or rock; it requires the person to carry ropes, picks, carabineers and other such equipment. Rock and ice climbing also requires scaling the ice or rock, which is mostly straight up or at an angle. Mountain climbing is done in groups of experience people as there are more changes of a person getting seriously hurt.  Mountain climbing can take one day to many days. In one day the person reaches a destined point and then comes back, while in a multi-day trip the person camps at locations in the middle before continuing on.

There are two styles of mountaineering: Expedition style and Alpine style. Expedition style is a longer journey and is made up for large groups. It requires climbing large mountains and the journey is usually slow and they require more supplies. They may also use porters, pack animals, glacier airplanes, cooks, multiple carries between camps, etc. Alpine style is a relatively shorter journey with smaller groups climbing medium-size mountains. Steven Cox and Kris Fulsaas list the two in their book ‘Seattle: The Mountaineers’. 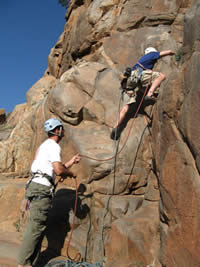 Rock Climbing is a sport that requires a person to climb up and down a rock formation or a rock wall. Rock climbing or scaling is a part of mountain climbing where a person may be required scale rocks to get a certain peak when climbing a mountain. However, rock climbing is not only limited to rock formations in the wilderness or rocks of a mountain. A person can also climb artificial rocks in an indoor rock wall. It is similar to rock climbing in nature but it has artificially placed footing that allows the climber an easy access and is also comparatively easier. Though rock climbing is not an Olympic sport, it is recognized as a sport by the International Olympic Committee.

Rock climbing gradually evolved from alpinism, where people would scale and climb the rock on the Alps to get to the top. It slowly became popular and now is considered as a sport in itself and separate from mountaineering. Rock climbing has been divided into grades to measure the difficulty of the routes. There are many different styles of rock climbing including Aid climbing, bouldering, deep-water soloing, free climbing, free soloing, indoor climbing, sport climbing, top-rope climbing, etc. Climbing requires a proper set of gear and materials. Also amateur climbers are often advised to go with a leader or an experience person. Rock climbing requires equipment such as rope, carabiners, helmet, harness, quickdraws, rappel devices or descenders and climbing shoes.