Difference between Nauseated and Nauseous

Key Difference: Nauseated is a verb, it means one experiences nausea. Nauseous is an adjective, it means one is affected with nausea.

The term nauseated and nauseous, both are the feelings of nausea. Though they sound a bit similar; they both have different meanings. Nausea itself is a sickness of the stomach that occurs after having food. It especially happens by a strong dislike/disgust or bad feeling, and that may lead to an impulse to vomit. 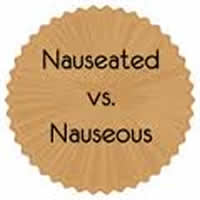 The two terms have mainly come from the English language. Nauseated is a verb, it means one experiences nausea. Nauseous is an adjective, it means one is affected with nausea. It has been noticed that most of the people are using both the terms as a verb like ‘I feel nauseous’ rather than nauseated. But, in the actual sense, when one feels discomfort from inside (in stomach), they should use the term ‘nauseated’ instead of ‘nauseous’. There is no particular definition of both the terms, but there are some people who know the clear meaning of nauseated and nauseous.

In a simpler sense, the recent or new dictionary makers have coined that nauseous can now be used in the place of ‘nauseated’. So now, it will be easier for everyone to use it anyway.

The comparison between Nauseated and Nauseous: