Key Difference: Nokia has recently announced a new phone to its line-up; the Lumia 928. The phone comes with a 4.5-inch AMOLED capacitive screen with broad back bezel. The phone is quite bulky and heavy, compared to other newer smartphones that are focusing on getting thinner and lighter. The LG Optimus F7 features a 4.7 inch screen and will run on Android 4.1.2 (Jelly Bean). In terms of hardware, it will have a 1.5 GHz dual-core processor, 2 GB RAM and an internal storage capacity of 8 GB. 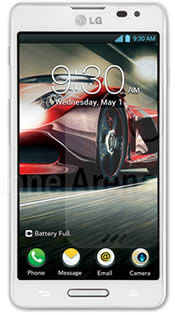 A popular series of smartphones by LG Electronics is the LG Optimus. Some of the newer phones under this brand include LG Optimus G, LG Optimus L5, LG Optimus L7, etc. On, February 21, 2013, LG announced the new sub category in the LG Optimus lineup, the F series, namely LG Optimus F5 and LG Optimus F7. LG’s F series are mid-range phones that are expected to address the growing demands of 4G LTE phones. Though, the phone has been announced for release, the company has yet to release all of the specs for the phone.

The LG Optimus F7 features a 4.7 inch True HD-IPS LCD capacitive touchscreen and will run on Android 4.1.2 (Jelly Bean). The device has a slim polycarbonate back that is a little slippery to hold. The phone features a wide and sleek physical home button on the bottom of the screen, which is surrounded by a capacitive back and menu buttons. The back of the device features a hexagonal pattern with varying tones and shades. The design makes the phone unique from the other phones that are available in the market.

In terms of hardware, it will be powered by a 1.5 GHz dual-core processor, 2 GB RAM, making it a pretty fast device in terms of running apps. The device provides an internal storage capacity of 8 GB, which is expandable by 32 GB. The phone houses an 8 MP primary camera for videos and photos and a 1.3 MP front facing secondary camera. The cameras come with features such as autofocus and geo-tagging. The phone will have 4G and NFC capabilities. The device comes with a powerful Li-Ion 2540 mAh battery.  The F7 will also get an updated version of the Q-Slide, which will work with calculator, memo, camera, browser and the video player. The phone also comes with a new safety care feature, which can send SMS or alerts to certain people if the user has not checked in a while or left a certain area. It will also let the family member know if the user has dialed 911 from their phones.

The information for the detailed table about the two phones has been taken from the Nokia website, theverge.com, LG website and GSMArena.com.