Difference between Noun and Pronoun

Key Difference: Nouns are used to name people, places, objects, events, occurrences, etc. A pronoun is a word that suitably replaces the noun in a sentence.

Nouns are the words which are used to identify people, places, objects, etc. Nouns are one of the eight parts of speech in the English language. These words are often the subject in a sentence. In absence of nouns, both speech and text become impaired. Nouns are mainly of two types:

Put the bread inside.

Proper Nouns: These are the nouns used to describe particular places,  people, happenings, etc. Words like these always have their first alphabet in capital as a rule. The names of the days in a week, religious texts, historical monuments, etc. are required to be used as proper nouns.

A few examples of nouns used in sentences are: 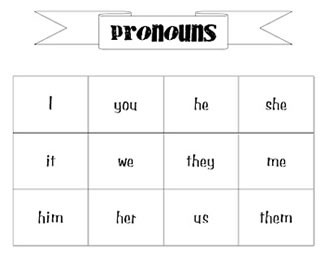 Pronouns are the words that can be readily substituted in place of nouns. Using nouns repeatedly in a piece of text can make it cumbersome and redundant, which is why pronouns are required to compile the text neatly. The use of pronouns also makes it easy to further describe a person, place, object, etc., without the repetition of their names.

Brad was hungry, so he ate an apple.

Few examples of using pronouns in a sentence are:

Comparison between Noun and Pronoun: