Difference between Noun and Proper Noun

Key difference: A noun is a word that is used for classifying objects, places, events and for naming people. Proper nouns are a kind of nouns, which stand for specific entities. Nouns plainly mean the names that we use in our routine life. The names of plants, animals, persons, places, events, etc. are nothing but nouns. They are the elementary portion of grammar. Nouns are extremely essential to our language, in terms of both speech and text. Without nouns, we won’t be able to identify things, places, or persons as per our convenience, which would be rather unpleasant and make our lives complicated. Nouns are basically of two types:

Common Nouns: As the name suggests, these nouns are the names that we use in general. We use many common nouns in our speech and text. Common nouns are not specific in nature. They don’t belong to a particular entity. These nouns could be the words of reference such as man, cat, dog, etc. They can also be used to indicate objects such as a pen, a pencil, eraser, etc. The first alphabet of a common noun is never capitalized, unless it opens a sentence.

The pool was very cold at night.

In the above sentence, the word ’pool’ is the common noun. As one can understand, the narrator in this sentence is talking about a swimming pool. This pool could be any general pool, the location of which hasn’t been disclosed specifically. Hence, the word ‘pool’ doesn’t have its first letter in capital, and is classified as a common noun. However, if we had refered to the pool by its name, for example 'ABC Pool', then the noun would have been proper noun, and hence would have been capitalized.

The other type of noun is: 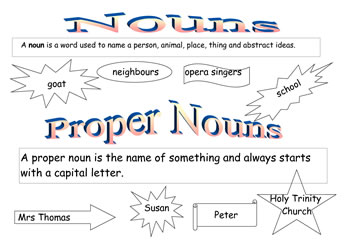 Proper Nouns: Proper nouns are the other sub-category of nouns. Proper nouns stand for the names of specific entities. They often indicate possession. The names of people, places, cities, important persons, historic sites, monuments, etc. fall under this category of nouns. These nouns carry a very important syntax rule with them. The rule states that the first alphabets of these nouns should always be capitalized, irrespective of wherever these words feature in a sentence.

We visited Dylan the other day.

In the sentence above, the word ‘Dylan’ assumes the position of the proper noun. This is so because the name ‘Dylan’ is a specific entity in itself. It belongs to the person who’s known by that particular name. This name cannot be applicable to all the other people in the world, which is the reason why it isn’t a common noun. Hence, the name ‘Dylan’ qualifies to be a proper noun.

Comparison between Noun and Proper noun: