Key difference: NTFS and FAT are both file systems. Both are two different methods, which store the data in a structured way on a disk partition. NTFS stands for New Technology File System while FAT stands for File Allocation Table.

File System is the most popular and widely used technique to store data on different types of devices such as a hard drive, memory card, USB, etc. The devices write and store the data in their systems so that the data can be modified, accessed, deleted, or distributed at the time of need. The data can also be upgraded or degraded while formatting the system. This article differentiates between the two popular file systems, NTFS and FAT File Systems.

The term FAT is an acronym for ‘File allocation Table’. It is simple, handy and robust. It was created by Microsoft in 1977 and is widely used and found in different portable and embedded devices.

According to Wikipedia, the name, FAT, of the file system originates from its prominent use of an index table that is allocated at the time of formatting. The table is made up of clusters. A cluster is a unit of space which is used for storage of files and directories. Each cluster contains entries for storage in the disk. Each entry contains the total number of clusters in the file, or an unused disk space, or the special reserved areas of the disk. The root directory of the disk contains the total number of cluster files in each file of that directory. The operating system then traverses the FAT table by looking through the cluster files of each disk file, and then making a cluster chain till the end of the file is reached.

The FAT file system offers good performance in light-weight implementations. It makes the data sharing easy and convenient; it is also a useful format for solid state memory cards. Due to technology advancement and the increased need for more space, various versions of FAT file systems have evolved. Some of them are mentioned below:

However, in FAT there is no security of data and it is not easily recoverable. This file system is also used to format the hard disk for ‘multibooting’ the OS configuration in case of a system crash. 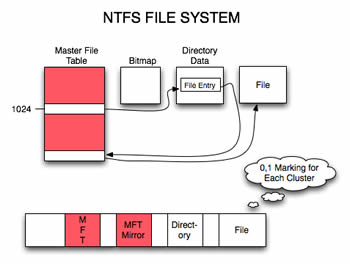 The term NTFS stands for ‘New Technology File System’. It is a widely popular file system, which was introduced after the FAT file system. It was developed in 1993 and was first used in the operating system Windows 3.1. It supports the data storage capacity up to 256TB. It is used in all the latest versions of Windows such as Vista, Windows 7, XP, 2000.

NTFS has an advanced data structure and sectors writing technique, improved security, and high capability of space utilization. Including this, the NTFS has several improved features over FAT file systems that are stated below:

Based on the provided information, it is clear that the NTFS system is a better file system. It comes with high security and data safety, whereas the FAT file system is low on data security, as it can be easily modified and shared by anyone.