Difference between Pigeon and Seagull

Key Difference: Pigeons belong to the Columbidae Family in the Animalia Kingdom. They can be found in almost all habitats and regions except for the places that have extreme heat or extreme cold. Pigeons vary in sizes depending on the different species and some can even grow to the size of a turkey. Scientifically the term ‘seagulls’ is actually an informal name for the scientifically correct name, ‘gulls’. Gulls belong to the Laridae Family of the Animalia Kingdom. They are associated with having heavy bodies, long wings, moderately long necks and long legs with full webbed feet.

Many people are not well-versed in the different types of birds that are present in the ecology. Pigeons and seagulls are often easy to tell apart because of their appearance. However, don’t be fooled that all pigeons look similar. There are many different types of pigeons that resemble seagulls in many ways and can often be confused for a seagull. However, they differ from each other in many ways including behavior. Approaching a seagull could cost the person few small pecking injuries.

Pigeons belong to the Columbidae Family in the Animalia Kingdom. The family includes around 310 species of birds. The most common species that is found in almost all cities is known as the Feral Rock Pigeon. Other names for this particular species include city doves, city pigeons and street pigeons. Pigeons can be found in almost all habitats and regions except for the places that have extreme heat or extreme cold. Pigeons vary in sizes depending on the different species and some can even grow to the size of a turkey. The largest species is known as the Crowned Pigeon of New Guinea, which is approximately the size of turkeys and can weigh between 2-4 kgs. The smallest species is the New World Ground-Dove which is approximately the size of a hummingbird and can weight around 22 grams. The other species range between these two. Pigeons are stout-bodied birds that have short necks, and short, slender bills with fleshy ceres. They have short legs and small heads on big compact bodies. They are famous for their head bobbing and cooing. The color of their plumage also changes depending on the type of species, with many pigeons sporting bright plumages.

The pigeons have been known to be intelligent creatures and have also been included in many comparative psychology experiments. They are also gentle and mild creatures that are easy to domesticate. They pigeons are often found in large flocks that may have anywhere from 50-500 birds. The male pigeons often puff their feathers and then strut in front of the female they are trying to impress. In addition to following the female, the male also emits small repetitive sounds and often bows and turns as he comes closer. Once the female allows the male into her proximity, the male mounts the female and mates. Pigeons are monogamous and often mate for life. At one time a pair of pigeons may birth one-two eggs. The fledging period of a nestling lasts about 30 days before the nestling can fly on its own.

Pigeons have had a rich history and due to their gentle nature, they have been easily domesticated for a variety of purposes. During the olden times, when technologies such as phones, internets and telegrams did not exist, messenger pigeons were used to send notes and letters to one another. Pigeons have also been used as sacrifice in many religions, where the people could not afford expensive animal. Pigeons are also respected and favored in Islam. They are also popularly used as food. 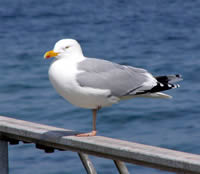 Scientifically the term ‘seagulls’ is actually an informal name for the scientifically correct name, ‘gulls’, as many gulls also reside on land and other dry areas and do not travel to seas and oceans for long periods of time. Gulls belong to the Laridae Family of the Animalia Kingdom. Until recently, most of the gull species were placed in the Larus genus, but it is now considered to be polyphyletic, or too different from the original ancestors. This led to classifying them into several different genera. Gulls are found in almost all habitats including the Arctic as well as the Antarctic. However, they are less common on tropical oceans.

Almost all species of gulls have been characterized with a uniform shape. They are associated with having heavy bodies, long wings, moderately long necks and long legs with full webbed feet. They have a heavy bill that is slightly hooked. Almost all of the species have rounded tails except for three that have forked tails. The most common type of gull that is found is known as the Herring Gull. The sizes of gulls vary depending on the species. The smallest gull is about 29 cm (11.5 inches), while the largest gull is approximately 76 cm (30 inches). Their weights range between 120 g (4.2 oz) and 1.75 kg (3.8 lbs). Gulls are known for their aggressive behavior and are known to attack quickly if they feel threatened. Gulls are also very territorial creatures and defend their territories from other males and intruders using high vocal calls as well as aerial attacks. Many species have also been known to show intelligence and has exhibited using tool behavior, such as using pieces of bread as bait to catch fish. They are also well-known for their mobbing behavior, where they annoy and harass predators and other creatures to get what they want.

Gulls are colonial and monogamous breeders. They also exhibit site fidelity by returning to the same site after breeding there once. Males and females often mate in the same colony. Most gulls breed once a year with the breeding season lasting from three to five months. One clutch includes approximately one to three eggs depending on the size and species of the bird. The females often try and synchronize their laying in one colony. Incubation period lasts 20-26 days and the parents are protective of their young until the nestling can fledge.

Gulls are kleptoparasites that feed on a diet of fish, insects, earthworms, rodents, eggs, carrion, offal, reptiles, amphibians, seeds, fruit, human refuse, and even other birds and fishes. Kleptoparasites are animals that rely on other animals or creatures to get their food. Gulls usually require other birds, humans or creatures and then steal the food from them. Gulls can also survive on salt water for many days due to a gland that secretes the salt out of the water. This is helpful when they wish to survive on the sea or ocean for many days. Gulls also feed on live animals such as whales, orcas and kelp gulls. Gulls have been proven positive for the ecosystem as they have been useful in waste management. Gulls have been known to reduce or forage on organic waste that has been left behind by humans.