Key Difference: Nokia has recently announced a new phone to its line-up; the Lumia 928. The phone comes with a 4.5-inch AMOLED capacitive screen with broad back bezel. The phone is quite bulky and heavy, compared to other newer smartphones that are focusing on getting thinner and lighter. The Blackberry Z10 is the latest smartphone that has been released in January 2013 by Research in Motion. The Z10 is a bar phone that is available with a 4.2 inch capacitive touch screen that has approximately 355 ppi pixel density, providing a clear and sharp display. If supports a 1.5 GHz Dual-core Krait, 2GB RAM with 16 GB internal storage capacity and expandable capacity up to 64 GB. 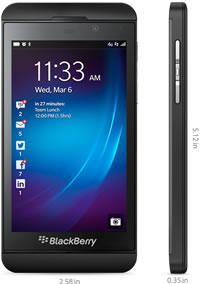 The Blackberry Z10 is the latest smartphone that has been released in January 2013 by Research in Motion. The phone is powered by the company’s BB10 and is believed to be the company’s latest attempts to capture the smartphone market. The Z10 is a bar phone that is available with a 4.2 inch capacitive touch screen that has approximately 355 ppi pixel density, providing a clear and sharp display. The phone is also light in weight and perfect for one-hand operation. If supports a 1.5 GHz Dual-core Krait, 2GB RAM with 16 GB internal storage capacity and expandable capacity up to 64 GB. The Z10 has an 8MP auto-focus camera along with 2MP front-facing camera for video conferencing. The camera offers a new Time Shift mode that allows users to pinpoint and adjust individual elements of a picture.

The users can interact with the OS using gestures such as swipe, tap, pinch, and reverse pinch. The phone comes with a few new features such as Hub, Balance, Story Maker and Remember. The Hub is a screen that is available by swiping left after the first menu page and task switcher and it is creates a single point where the user can check all updates from SMS, e-mail to facebook notifications. It also offers the users to post messages, update twitter, facebook and any other services. BlackBerry Balance is a feature that allows people to separate their work life from their personal life. It allows easy access to creating two separate profiles, where work related and personal related profiles can be kept separate and maintained. Story Maker is an app that allows users to create a story by selecting photos and an audio clip to go along with it. The app will automatically create a video and will also include effects. The new keyboard on the Z10 has an adaptive feature that learns as the user types words and also suggests future words that can be used making typing e-mails and messages easier. Many reviews do state that one of the downfalls of the phone is the camera as well as lack of apps. The camera is not as sharp as it could be and the phone does not offer many apps in the BlackBerry World store.

The information for the detailed table about the two phones has been taken from the Nokia website, theverge.com, Blackberry website and GSMArena.com.