Difference between Molarity and Normality 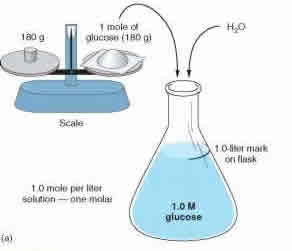 Morality and normality are two methods of measuring concentration. These two concepts play an important part in science, specifically chemistry and help us break down mixtures and solutions. These two measurements help us determine how much of which substance is dissolved in another substance.

Both of the concepts base their calculations on how many moles are present in the current solution. A solution can be defined as a homogeneous mixture, which means two or more components have been mixed to the point that it cannot be distinguished by the naked eye. These two concepts require understanding moles as it determines the number of moles present in the solution. The theory of moles was discovered by Italian scientist, Amedeo Avogardo.

Normality is basically a measure of concentration that is equal to the gram equivalent weight per liter of solution. An equivalent is the number of moles of reactive units in a compound. Gram equivalent weight is a measure of the reactive capacity of a molecule. According to chemeketa.edu, “The normality of a solution is the concentration expressed as the number of equivalent weights (equivalents) of solute per liter of solution.” Normality is denoted with a capital N. In laymen’s terms, normality of an acid is how many H+ ions it has that can be donated to a solution. Similarly, in a base, normality is determined by how many OH- ions does the compound have to negate the hydrogen ions in the solution.

The normality of a solution is determined by the solution’s role in the reaction. Normality is indicated by Eq/L and mol/L.  Normality is commonly used in acid-base reactions to express the concentration of protons (H+) or hydroxide ions (OH−) in a solution. An example of normality: one mole of hydrogen ions is equal to one equivalent of hydrogen ions. Every substance may be assigned an equivalent weight. The equivalent weight may be equal to the formula weight (molecular weight, mole weight) of the substance or equal to an integral fraction of the formula weight.

The normality of a compound can be determined by the number of H+ and OH- ions present in the solution. Let’s explain using an example: A reaction that we have is HCL + NaOH. The solution would produce NaCl + H2O. One mole of HCL has 1N, this is because each molecule of HCL has 1 H+ ion. NaOH also has 1N because it has 1 OH-  ion to negate the 1 H+ ion.

An easier way to determine normality of an equation would be to use a given formula. Normality = molarity x n (where n = the number of protons exchanged in a reaction).

Thanks for this article it's really helpful.

Thanks for this article....