Difference between Teaspoon and Tablespoon

Key Difference: Teaspoons and tablespoons are two different pieces of spoons that are part of the cutlery. The teaspoon is the smaller spoon, while the tablespoon is the bigger one. 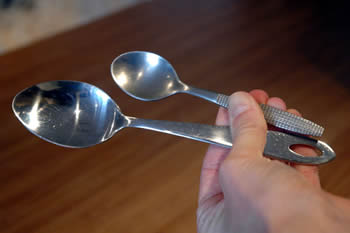 Every home has stacks of cutlery in the kitchen. Cutlery is the sets of spoons, forks, and knives that one uses to eat with. Teaspoons and tablespoons are two different types of spoons that are part of the cutlery. The easiest way to distinguish between the two spoons is that the teaspoon is the smaller of the two, whereas the tablespoon is the larger one. However, this of course does not take into account the soup spoon, the dessert spoon, etc.

In an average dining set, the teaspoon is generally the smallest spoon in the group, unless a coffee spoon is present. As its name suggest, its primary usage is for tea. It is the spoon used for adding sugar to and stirring hot drinks such as tea, coffee, etc. However, teaspoons may also be used to eat certain types of foods, such as dessert, if there is no dessert spoon.

A tablespoon is generally the biggest spoon in the average dining set. It is commonly used to eat dinner, and may also be used to serve some foods on the table. 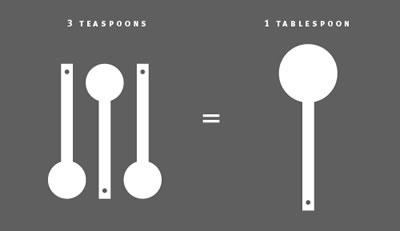 Comparison between Teaspoon and Tablespoon:

Hi thanks, a big deal my friend. I was giving the wrong measurement in my ingredients list in my website, until someone pointed it out to me. I was searching for some information on it, and I found your page to be very precise, with the clear picture. Thanks a lot. Regards Vaishak S