Difference Between Plasma and Projection TVs

Large TVs used to be considered as a luxury, however the trend these days is ‘bigger is better’. Plasma TVs are a flat panel display that uses noble gases in order to produce light and images. Projection TV technology is used to project images on a big white screen, similar to data projectors, but these projectors are designed to project standard and high definition TV signals. 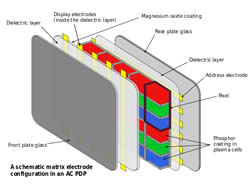 The photons interact with the phosphor material on the cell walls and give off light, creating a visible light photon. Each pixel has three subpixels, one coated with red, one with blue and one with green. By manipulating the intensity of the current, the system can produce hundreds of different combinations of the three colors and creates an image on the screen.

Projection TVs have a larger screen compared to Plasma displays. A Projection TV initially creates a small picture and then uses a beam of light in order to enlarge that image on a screen. Projection systems come in two types: front-projection TV and rear-projection TV. 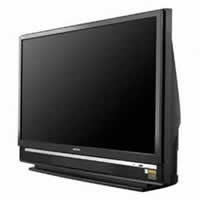 Projection TVs have four types of projection techniques: Cathode Ray Tube (CRT), Liquid Crystal Display (LCD), Digital Light Processing (DLP) and Liquid Crystal over Silicon (LCoS). CRT technique uses cathode ray gun and a color wheel in order to display images on the screen. LCD uses liquid crystal molecules embedded between two polarizing filters and displays images when a charge is passed through the two filters; the crystals allow/block light passing through the filters. DLP uses a digital micromirror device (DMD), a chip mounted with tiny microscopic mirrors, in order to reflect light and create images. The system is also mounted with a color wheel in order to create color images. LCos is a new technology that is a combination of DLP and LCD technology. In an LCos set, light passes through liquid crystals and is then bounced off a reflected surface in order to create an image.

When buying a projection TV, certain things that need to be kept in mind are: the size of the room and the size of the screen, availability of a proper ambiance, compatibility with standard and high-definition set up, the cost of all the components together and normal specifications (contrast ratio, frame rate, resolution, etc).