Difference between Pokemon and Digimon

Key Difference: Digimon and Pokemon are Japanese franchises that both began around the same time. They both are fictional cartoon characters; where Pokemon stand for Pocket Monsters and Digimon stand for Digital Monsters.

Pokemon and Digimon are two different fictional characters, but they are very similar to each other. Both Pokemon and Digimon are wild creatures and display a degree of instinctual behavior. They are often confused as similar by those unfamiliar with both series. Let’s first understand both the terms in the following context. 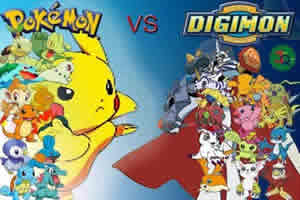 Pokemon is short for ‘Pocket Monsters’. Pokemon are fictional cartoon characters which were designed and published by Japanese video game company known as Nintendo. Pokemon was created by Satoshi Tajiri in 1996; and was the second-most popular video game–based media franchise in the world. Pokemon are essentially fighting pets, and their trainers will collect a number of them to use in appropriate circumstances. Pokemon was released on two game cartridges for the GameBoy. Later on, both series were turned into television series, comics, and video games for various systems. 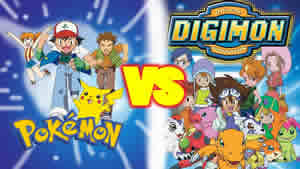 Digimon is short for ‘Digital Monsters’. Digimon are also fictional cartoon characters, which are Japanese media franchise. It was released on June 26, 1997. There are various series, which was introduced by Japanese media franchise. In simple terms, Digimon is a children's animated series produced in Japan. They are digital monsters made of computer data rather than flesh and blood. As they mature, they digivolve into more powerful forms and take new names. Although they are treated like pets, they are capable of intelligent speech. Each of the children bonds with a particular digimon partner, taking care of it, and the digimon partner uses some of its child’s energy to fight its battles. In return, the digimon partners fight to protect their children from evil digimon.

Both Digimon and Pokemon differ in the popular animes associated with the two. While the Pokemon anime seems to use a more episodic style, Digimon has a plot line more akin to traditional animes. The shows of both are system-oriented phenomena. Digimon seems to be aimed at an audience two or three years older than the Pokemon audience, addressing more serious themes and using a more complex narrative structure.

Comparison between Pokemon and Digimon: