Difference between Pong and Ping Pong

Key Difference: ‘Pong’ is a table tennis video game which was earlier played on a coin-operated machine. It was usually installed in restaurants or bars. On the other hand, ‘Ping Pong’ is another name for Table Tennis, where two or four players hit a light weighted ball and use a table tennis racket. 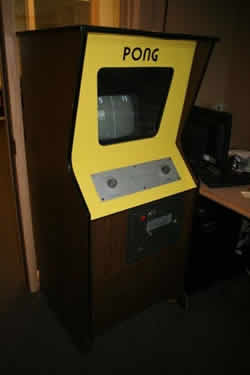 ‘Pong’ is basically the first arcade game, which featured simple two-dimensional graphics. It is the earliest video game which came into existence and became popular for common people. It was released it 1972 and was fabricated by Atari Incorporated (Atari). It quickly gained huge success as it was the first commercial successful video game, which managed to start the video game industry. It has launched many innovative games after this but Pong was the only one which was amongst any other game.

Pong is a video game when a player has to hit a ball back by the use of a paddle and has to earn more points from the opponent. The opponent can be the computer that is already fed in the machine or there can be two players who can play together as competitors. After a few years, Atari designed the home appliance pong, which a kid can play anytime he wanted but it was unsuccessful. Though it was the first video game, it is still famous. In fact, there are additional activities and effects which a person can utilize.

Table tennis is mentioned as ping pong because ping pong had already been registered as a trademark by the sports company John Jaques & Son in England. It was earlier mandatory to use the term ping pong for table tennis yet these companies were promoting ping pong tournaments which only permitted their own equipment to be used and were threatening to take action against anybody who used their proprietary trademarked name of ping pong without specifying the use of their equipment.

Finally, ‘Ping Pong Association’ decided that it was not correct to use this trademark henceforth and renamed themselves as “Table Tennis Association”. So now it is simply known as Table Tennis rather than Ping Pong.

On the contrary, ‘Ping Pong’ is nothing but another name for Table Tennis. It is an indoor game and very inexpensive to play. Here, two or four players hit a light weighted ball and use table tennis rackets. In between, a table with a thin net divides the players. As per the rule, points are scored when a player is not able to pass the ball to the other player.

Nowadays, there are several websites named as ping pong games. In such games people can explore their talent and learn how to play it. Playing video games, sitting at home is just a mental activity. People should move out and try out playing it physically rather than sit at home and keep information.

It is as simple as, Ping-Pong (a game (trademark Ping-Pong) resembling tennis but played on a table with paddles and a light hollow ball). Pong is a video game of table tennis.