Difference between Puma and Panther

Though Puma and Panther belong to the Animalia Kingdom and Felidae Family, they vary in their features, size, color, and many other things. 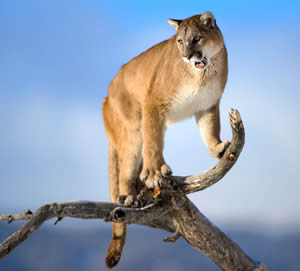 Puma is a large wild animal. At times, it is considered similar to his cousin cat, the lion, because of its plain skin coat, as compared to other spot coated cousin cats. Puma is also commonly referred to as cougar, and is the second largest cat in North America. Puma is also known as the mountain lion, panther, mountain cat, and catamount. The puma is unbelievably flexible to its environment. A puma in the wild will not mate until it has established a home territory. On the other hand, panther’s mating season is from December through February. The young stay with their mother for about two years. Females do not mate again until the young have left.

A panther is the same as a leopard, while the term Panthera describes the whole family of big cats. Panther is most commonly assigned to the Black Panther, which is a melanistic jaguar, leopard and the Florida panther, a subspecies of cougar. Only four of the Panthera cat species have the ability to roar. Black panthers are most commonly melanistic variations of jaguars, leopards, and very rare black tigers. In Jaguars, the melanism gene is dominant and black jaguars may produce either black or spotted cubs.

Puma is most commonly found from the Canadian Yukon to the southern Andes of South America. Whereas, panthers are most commonly found in southwestern China, Myanmar, Assam and Nepal, Travancore and other parts of southern India. Unlike the big cats, puma never roars, instead it growls, hisses, screeches and purrs, whereas panther can produce roars. Puma can vary from silver gray, to tawny to reddish, whereas panther can vary from white to black.

Comparison between Puma and Panther: