Difference between PVA and LCD

Key Difference: The main difference between a LCD and  PVA is a that LCD is a type of display panel that uses liquid crystals in order to produce a picture, while a PVA is a type of a TFT LCD.

The main difference between a LCD and  PVA is a that LCD is a type of display panel that uses liquid crystals in order to produce a picture, while a PVA (Patterned Vertical Alignment) is a type of an LCD. 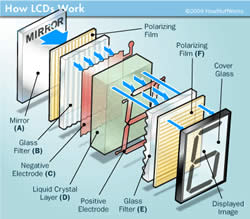 LCDs (Liquid Crystal Display) are displays that use liquid crystals sandwiched between two sheets of polarizing material. The polarizing filters are placed perpendicular to each other, so when light passes through the first filter it will be blocked by the second filter. The light that is allowed to pass through creates the images when electrical charge is applied to the crystals. LCDs are used in various applications such as computer monitors, TV screens, watches, calculators, etc. There are two types of LCD, passive matrix and active matrix. Passive matrix displays are used for less demanding applications such as calculators and watches, where less information is required to be displayed and consumes the lowest power.

An LCD uses a select type of liquid crystal known as twisted nematics (TN), which are twisted in shape. Applying a current to these crystals causes them to unwind to a certain degree depending on the voltage. A LCD is in a layer formation, it starts with a mirror on the back for reflection, followed by a piece of glass that has a polarizing film on the bottom side, and a common electrode plane made of indium-tin oxide on top. After that is a layer of liquid crystals, followed by another piece of glass with an electrode and another polarizing film, which is at a right angle to the first one. The LCD is then hooked up to power source that provides a charge to the crystals and causes them to create an image on the screen. LCDs also have a backlight that makes the image visible to the user. LCDs most commonly use a CCFL (cold cathode florescent light) as a backlight, but the trend is now shifting to LEDs (light emitting diodes).

PVA (Patterned Vertical Alignment) is a type of thin-film transistor (TFT) liquid crystal display. It is a wide viewing angle technology best known for use in Samsung TVs for improving front screen performance at different angles. A TFT (Thin-film transistor) is a field-effect transistor that is created by depositing thin films of a semiconductor active layer as well as the dielectric layer and metallic contacts over a supporting substrate. Each pixel of a LCD receives a transistor that makes switching it on and off very easy. Also since the TFT are embedded within the panel itself, it reduces the crosstalk between pixels. Crosstalk is when a signal transmitted to one pixel also affects another pixel. A TFT is also known as an active matrix display technology, which is more responsive to change and has a faster refresh rate. The faster response rate also eliminated the problem faced by gamers. Currently, TFTs have become the standard in producing LCD and LED screens.

PVA panels often use dithering and FRC (frame rate control), a method that achieves higher color quality in low color resolution display panels. Another type of PVA technology is S-PVA (Super Patterned Vertical Alignment), which does not use color stimulation methods and uses at least 8 bits of color per color component. S-PVA eliminates off angle glowing of solid blacks, reduces the off angle gamma shift and is cheaper compared to normal PVA panels.