Difference between Reflection and Refraction

Key Difference: When the light falls on any surface, a part of that light is sent back to the same medium. This is known as reflection. When the light bounces back from its normal lane, it is termed as refraction.

According to the Dictionary.com, ‘Reflection’ is: 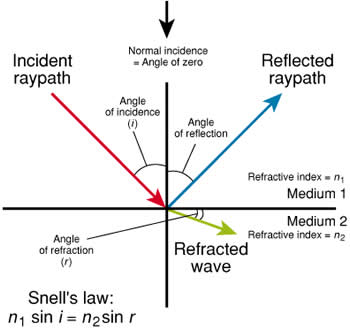 Specular reflection is the light that is reflected in the same angle. Whereas, in the diffuse reflection, the light reflected from the rough surface is scattered in all direction. It does have the consistency, or it is not angled.

According to the Dictionary.com, ‘Refraction’ is

The images that are observed through the glass or any other objects are known as refraction. Let’s take an example of refraction of light – when visible light passes through a transparent material such as glass, air and water, its velocity changes according to the Index of Refraction of the objects. In simple terms, the light changes direction, or ‘bends’ as it passes through the boundary between the two mediums. The best way to differentiate between reflection and refraction is that reflection is found in mirrors while lenses use refraction. The angle of incidence and the angle of reflection are not the same in refraction.

In short, when light enters a new medium at an angle it will bend because it is slowing down. The change in speed causes the ray to bend or change direction.

Comparison between Reflection and Refraction: