Oils are considered as an essential part of cooking. They are widely used for deep-frying, sautéing, stir-frying, salad dressings, etc, but with so many different varieties to choose from, it becomes difficult and hard to pick the right oil for the kitchen. The two healthiest choices of cooking are ‘rice bran oil’ and ‘canola oil’. Both, ‘canola’ and ‘rice bran’ are widely used for their high smoking points and high in vital ingredients quality.

Rice bran oil is a non-flavorsome cooking oil that is extracted from the inner husk or covering of the rice grains. This oil is known for its high temperature cooking and is popularly used in Asian countries. It is also popular for its nutty and mild flavor that enhances the taste and quality of the food. This oil is also used as a substitute for carnauba wax in cosmetics, confectioneries, shoe creams and polishing items. It has the ideal choice for health fanatics because of its high nutrients, vitamins and anti-oxidants properties and the Trans-fat free nature. 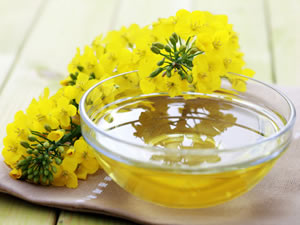 Canola oil, on the other hand, is neutral in taste and light in texture, which makes it a great match for just about everything. This oil is obtained after a long process of precipitation and organic acid treatments. And, because of its high heating properties, canola oil is extensively used for baking, stir-frying and grilling. Often, canola oil is also used as a substitute to saturated fats. This oil is applied for industrial use also such as lubricants, bio-fuels, candles, lipsticks, and newspaper inks, etc. Also, this oil is proved to be highly beneficial as the fertility-preserving vaginal lubricant. Then again, recent studies have been conducted to utilize canola oil for reducing the growth of cancer cells.

Both these oils are used around the world. Both have their own individual properties that define them to be ‘The Healthy Oil’ or ‘The Good Oil’ by their consumers. They are often considered to be nutritionally balanced, versatile and with a pleasantly subtle taste, in short perfect for all types of cooking. So, this article further differentiates between the two most widely recommended oils in the pantry, ‘rice bran oil’ and ‘canola oil’.