Difference between Selfish and Self Centered

Key difference: ‘Selfish’ people concentrate only on their personal views and regards, and thereby avoid others. While, ‘Self-Centered’ individual are those who are excessively concerned with only their needs and importance. Both, words reflect to those people who give or seek prime importance to only themselves. These are not concerning to other individuals or ignore their participation.

Actually, both these words, ‘selfish’ and ‘self-concerned’ mean same. But slightly differ in their deep explanations; i.e. selfish relates to selfishness, in which individuals deliberately attempt to improve their part of expense share from others. Or can also be considered as taking others advantage and fulfilling one’s desire. While, self-centered comes from self-centeredness in which individuals emphasizes more on their sayings, directions or mindsets to achieve their goals. Here, they ignore other individuals without letting it known to them. 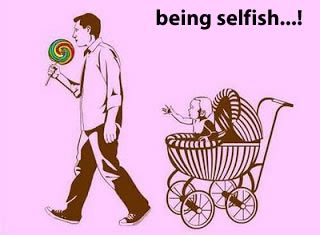 ‘Selfish’ combines the pronoun self-, meaning ‘to or for yourself’, with the suffix -ish, for "having the character of."

A person is selfish when he/she is too very conscious about his/her needs and demands; and hence in order to accomplish them they intentionally and knowingly perform things so that they can achieve their needs. Many times, people ignore things a lot in selfishness; they start finding ways out to avoid those things from which they are frustrated. They don’t face them but, rather keep themselves away from them. Also, being selfish means only to think about one self’s and their profit; then for achieving that part of profit that person can opt for any situation. More broadly, it relates to one self’s desperation to have all things only with themselves and not with others. 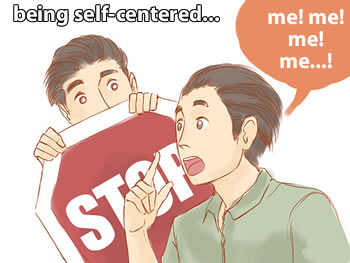 A self-centered individual is the one who gives an excessive importance to him/herself and their related things. These are the ones’ who primly focuses on only their sayings and talks only about themselves and their related things. Not concerning and giving importance to others. Self-centered people tend to ignore the needs of others and only do what's best for them. These can also be called as egocentric, egoistic, and egoistical. Here the person doesn’t even realize their doings or their talks. The term ‘self-centered’ is mostly taken into negative connotations, as the word clearly refers to, centered in oneself. In its extreme forms, the behavior is considered to be a type of personality disorder. People with such type of disorder are very centered to their own concerns or views. They lack empathy and often get exaggerate their own self-importance. Due to this, these types of people find it difficult to co-operate and manage with their dear ones.

Comparison between Selfish and Self Centered: