Difference between Sodium and Salt

Key Difference: Sodium is a soft, silvery-white and highly reactive metal and is a member of the alkali metals. Salt, also known as rock salt or table salt is a crystalline mineral formed by the combination of sodium and chloride. Salt is made up of approximately 40% sodium and 60% chloride. 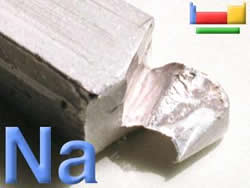 Sodium and salt are closely related as majority of salt is made up of sodium. In technicality, salt is any ionic compound formed when an acid is mixed with a base. However, the most well-known salt is the one we consume. It is also referred to Table Salt. Salt is scientifically known as sodium chloride or NaCl.

Sodium is a chemical element that is represented in science with the symbol Na and has the atomic number 11 on the periodic table of elements. Sodium is a soft, silvery-white and highly reactive metal and is a member of the alkali metals. Sodium is not found freely in nature, but rather part of a compound, which must then be seperated. It is the sixth most abundant element in the Earth’s crust and is found in many different minerals such as feldspar and rock salt. Many salts of sodium are highly water-soluble and the most common form of sodium is found with chloride in table salt. In addition to salt, sodium is also used in sodium hydroxide (lye) for soapmaking and baking soda.

At standard temperature and pressure, sodium is a soft metal and is a good conductor of electricity. Sodium has a silver luster that tarnishes rapidly and forms a white coating of sodium hydroxide and sodium carbonate. Sodium burns yellow and changes color at different temperatures. 20 isotopes of sodium are known, but only 23Na is stable. Sodium is used immensely in glass, paper, soap, and textiles industries.

Salt, also known as rock salt or table salt is a crystalline mineral formed by the combination of sodium and chloride. Salt is made up of approximately 40% sodium and 60% chloride. This compound is usually harvested from bodies of water where sodium gets absorbed into the water and mixed with the chlorine that is found there. Salt has been extracted from the bodies of water for over 8,000 years and has been used as a spice to add a flavor to food. Salt has also become one of the basic tastes and a food that has a high amount of salt is referred to as “salty.” 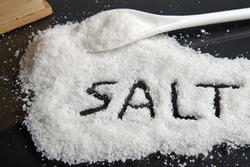 Salt is found in various different forms unrefined salt (such as sea salt), refined salt (table salt), and iodized salt. Iodized salt is suggested by doctors for usage as it is one of the easiest ways for the body to get iodine. Salts can range in color and are found in translucent, white, pale pink and grey in color. Salt has been considered as a valuable commodity during human history.

Sodium is used in the human body to transmit nerve impulses and is found in every cell. However, it is important for the body to maintain a balance of the amount of sodium found in the body. The balance of sodium in the body also regulates the blood pressure and higher the sodium, higher the blood pressure. Hence, people with high blood pressure are being asked to cut back on the salt content in their food. Salt is not the only food where sodium can be found, it is also available in various other food such as pickles, processed cheese, seafood, soups, tomato sauces, condiments, etc.

People that are more susceptible to having cardiovascular diseases are asked to regulate their intake of sodium, which indirectly translates to salt. It is not the salt that causes the problem but rather the sodium. According to the American Health Association, a healthy person should in take around 2,400 mg of sodium, which converts to roughly one teaspoon of salt. A person that is susceptible to having health problems should limit sodium in take to 1,500 mg.