Difference between Squash and Racquetball

Squash and racquetball are two sports that seem very familiar when inexperienced with the gameplay. Both these games are played in an enclosed rectangular space, and require racquets and balls. However, the rackets and balls are also slightly different, along with the rules, gameplay, and scoring system. 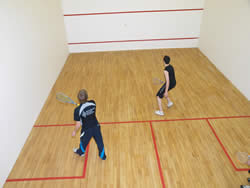 Squash is a racquet sport, which means it requires a racquet and a ball in order to play. It is played in a four-walled rectangular court with a small hollow rubber ball. It is a high-speed sport and can be played by two or four people on the court. The game has been adapted from the English game ‘rackets’, however the racquet is similar to the tennis racket. The game was developed at the Harrow School in England and was originally played outside. Squash can also be played outdoors.

The racquets are made of composite materials or metals with synthetic strings. They are 27 inches in length, 8.5 inches in width, have a strung area of 500 centimeters and weight around 255 grams. The balls that are used have a diameter between 39.5 and 40.5 mm and weight around 23 to 25 grams.  They are made by gluing together two pieces of rubber compound and are hollowed out in the middle. The balls change depending on the experience and preference of the player. The court is rectangular in shape and is 40ft long, 20 ft wide and 20 feet high. The court is divided into the front and back of the court by lines and has a half line court that divides the left and right side of the court at the back end of the court. Each side has small boxes that are used for serving.

The front of the court is marked with three parallel horizontal lines. The front wall has the largest playing area, while the back wall has the smallest playing area. The top marked line on the front wall extends to the back wall as well, and is used to mark the playing area. The second line marks the serve line and the bottom line marks the boundary line, if a person strikes either these lines or outside these lines, the ball is out. While serving the ball, the player is required to place one of his/her feet in the server box at all times. After serving, the players take turn hitting the ball. The ball may hit the side walls and the back wall, however it must not go above the out line. The objective of the game is to keep hitting the ball and collect points in order to win the game. The player must earn 11 points in each game and win 3 out of 5 games in order to win the match. However, the person only wins if he beats his opponent by 2 points in each game. 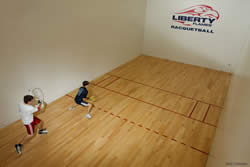 Racquetball is a racquet sport that is played in an indoor or outdoor court with a hollow rubber ball. The invention of the game has been credited to Joseph Sobek, who created the game in 1950 by adding a stringed racquet to paddleball. Sobek, originally named the paddle rackets. The name racquetball was coined by Bob McInerney, a professional tennis player in 1969. The game has been compared to be similar to handball, but with racquets.

The racquets are made of composite materials with synthetic materials and are larger compared to the squash racquets. The racquets can be no longer than 22 inches and has a larger hitting surface. The balls are hollow rubber balls that should be 2.25 inches in diameter. The racquet balls are made of rubber and have a more bounce in them. Racquetball requires a fully closed indoor or outdoor court that is rectangular in shape. The dimensions of the court are 40 feet long, 20 feet wide and 20 feet high. The court is only marked on the floor and the front wall with bold or dashed red lines, while all the other areas are unmarked.

The court is divided in a 15 ft, 5 ft, 5 ft and 15 ft format. The first marking after 15’ is the receiving line which is marked with a dashed line, followed by the short line which is in bold, then the service line. The service box is formed by the short line and the service line. Within the service box, there are two lines that are perpendicular to the service and short lines. These lines mark the area where the non-serving double partner would stand in a double’s game. The server stands behind the serving line and must drop the ball once before hitting it on the front wall, which should land beyond the short line, after which the players would take turns hitting the ball. The ball does not have any out line, it can hit in all directions including the sides as well as anywhere on the back wall. Racquetball uses a side-out scoring system, where the player can only earn points on serves. The players are required to play eyeguards in order to keep the ball from damaging the eyes in case of an accident. Many players also wear gloves to keep a grip on the racquet; however these are optional. The player must earn 15 points to win one game and win two out of three games to win the match. Similar to squash, the player must win by a 2 point margin.

Instead of too many differences, the other common thing is, both used balls end up to be recycled into whatever form of creativeness. Some made chair, some made blanket, etc. But i personally think that, squash sports need more energy and more fitness than tennis. I mean maybe just like a little bit more. Overall both sports got the same way to burn a lot of calories.The major different could be the equipment and also style of play.