Difference between Steroid and Testosterone

Steroids are fat-soluble organic compounds that are naturally present and produced in the human body. These are responsible for a wide range of physiological development such as reproductive growth, tissue regeneration, and caloric synthesis in the human body. Steroids such as the dietary fat cholesterol, the sex hormones estradiol and testosterone, and the anti-inflammatory drug dexamethasone are naturally present in the human body. A steroid is a type of compound which contains a characteristic arrangement of four cycloalkane rings that are joined to each other. There are over hundred types of distinct steroids that are found in plants, animals and fungi.

Artificial steroids (also known as corticosteroids) have a variety of medical uses in treating illnesses such as inflammation in the body like asthma, arthritis, eczema, and even cancer.  Other types of steroids can also be used for bone marrow stimulation, growth stimulation, appetite and preservation and increase of muscle mass, to accelerate puberty in late bloomers, male contraception, prevention of bone loss, hormone replacement and gender identity disorder. Steroids can be administered through inhaling, injecting, orally or in gel form to apply directly. Though artificial steroids have medical uses, they also have adverse effects such as liver damage, high blood pressure, baldness, heart failure, etc. It can also cause psychiatric effects such as mood disorders, aggression, hypomania, suicidal thoughts, etc. 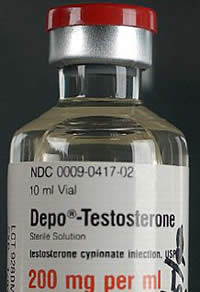 Testosterone is a steroid that is part of the androgen group and is naturally produced in the human body, in both males and females. In mammals, testosterone is primarily secreted in the testicles (in male) and the ovaries (in females), while small amounts are also secreted by the  adrenal glands. These are most commonly known as the male sex hormone. In males, testosterone plays an important role in development of male reproductive tissues like the testis and prostate and a secondary role in muscle development, bone mass and growth of body hair. Males produce testosterone in greater concentration and 20 times more in quantity compared to the female.

Artificial testosterone is a type of steroid that is most commonly used in order to treat males that have little or no natural testosterone production in their body, infertility, erectile dysfunction, anemia, height growth and appetite stimulation. It is also used by body builders and athletes (though it is illegal) in order to enhance strength and endurance. Testosterone can be administered orally, injecting, skin patches, gels or creams. Excessive use of artificial testosterone has shown side-effects such as degrading of the immune system, liver damage and cancer. Psychological effects include aggression, depression, rapid mood swings, and irritation. In women, high amounts of testosterone can affect the menstrual cycle, weight gain and hair loss, while it males it can cause the testes to shrink and sperm count can be drastically reduced.

It's really good if you do not abuse it. I have used many years but no side effects. And it is important to buy online steroids genuine