Difference between Sushi and Maki

Key difference: Sushi is mainly cooked rice with vinegar combined with other ingredients, usually raw fish or other seafood. Maki is a type of sushi roll which is sushi rolled in seaweed.

Sushi is the most popular Japanese dish known worldwide. Sushi is mainly cooked rice with vinegar combined with other ingredients, usually raw fish or other seafood. Sushi is mainly made up of two parts, shari and neta. Shari is the cooked rice with vinegar, while neta refers to the various other ingredients. There are many types of sushi; nigiri -zushi (hand shaped sushi), oshi-zushi (pressed sushi), maki-zushi (rolled sushi) and chirashi-zushi (scattered sushi). Sushi, literally translated means sour tasting, this is mainly because of the vinegar rice and fermented fish, which was originally used to make sushi.

Maki-zushi is a type of sushi that is usually rolled up in nori (seaweed). It is also sometimes rolled up in a thin omelette, soy paper, cucumber, or shiso (perilla) leaves. Maki-zushi is the most commonly known sushi. Maki-zushi, which means rolled sushi, is also called norimaki (nori roll) or makimono (variety of rolls). There are various types of maki-zushi, including futomaki (thick, large or fat rolls), hosomaki (thin rolls), temaki (hand roll) and uramaki (inside-out roll).

The different types of sushi are:

Types of makizushi include: 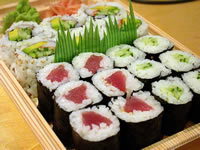