Difference between Tap and Bottled Water

Key difference: Tap water is drinking water available from an indoor tap which is part of a household’s plumbing system. Bottled water is water packaged and sold in plastic bottles by private companies. 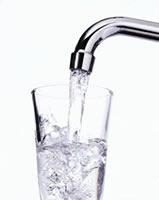 Tap water is taken either the ground or from rivers, streams and lakes. It is then filtered through sand and gravel. Chemicals are also added to purify the water and to get rid of germs and viruses. All of this is done under strict government care. The tap water also undergoes tests and regulations that are more rigid than those for bottled water. There are set government standards for tap water whereas there are no set government standards for bottled water.

Bottled water, on the other hand, is water taken from rivers, streams and lakes, and packaged into bottles for sale to the public. According to NRDC, bottled water is not necessarily any purer and an estimated 25% of all bottled water is just tap water in a bottle, however at a much higher cost. The bottled water may be carbonated, distilled, de-ionized, or mineralized before being packaged. However, the processes of distillation and deionization may remove positive minerals from the water. The bottled water treated in such a way must be labeled as such for public knowledge.

Moreover, according to the Food & Water Watch website, a recent study tested various bottled water brands for contaminants and found that approximately 25% of them had microbial or chemical contamination higher than what was allowed and considered as non-threatening by government regulations.

Also, in case, contamination occurs in tap water it is more likely to be immediately reported, as a government will usually not risk the lives of its citizens. However, the contamination of bottled water will probably be reported at a later time after it is found out and after the company has done everything to protect itself from the PR mess.

Furthermore, bottled water is more harmful as the plastic bottles tend to release

chemicals in the water. These polyethylene containers are bad for the health and are even worse for the environment. Bottled water is usually transported over many miles from the packaging factory to the various retail points. This adds to the industry's carbon footprint. Also, most of the plastic water bottles go to landfill where they can take up to 450 – 700 years to decompose.

So, basically, tap water is better, healthier, cheaper, more easily available, and environmentally friendly than bottled water. However, if someone is unsure of tap water, a precaution would be to filter the water before using. Filtration will help remove any toxins and the smell of chlorine which is used to treat tap water. On the other hand, one should utilize bottled water in case they live in a developing country and safe water is not readily available. Also, bottled water can come in handy while traveling, especially to foreign countries, where the water might be different than what the body is used to.