Difference between TCP and IP Protocol

The world of computers is very interesting, and especially the networking of computers. It has revolutionized the whole concept of communication. The elements of computer network communicate with each other and thus provide a great variety of features to users. We send e-mails to our friends, send them our pictures, listen to a distant radio channel, and many more things. The whole functioning of the network seems to be running seamlessly on a simple platform. However, behind this simple looking network, lies a complex system that has been simplified by use of various protocols. In computer network’s glossary, protocols are the rules, conventions and data structures governing the data communication. These protocols define the ways in which computers and other network devices can exchange information over a network.

The obvious question may arise

What is the need of these protocols?

The answer to the question lies in heterogeneous system of networking. Computers that are interacting with each other may differ in various attributes like hardware, specifications etc. Thus, a unifying set of rules is must that should be followed world wide, in order to communicate the data between various types of computer systems. We can simply say that it is the language of computers to talk to each other.

TCP and IP are two best known internet protocols from the suite of communication protocols. The protocols are placed in layered hierarchy­­. Whenever a message is passed from source to sender, the message must pass from each layer of protocol stack. Today, the networking standards use two main protocol stacks known by Open System Interconnection (OSI) model and the TCP/IP model. OSI is a seven layered architecture, whereas TCP/IP consists of four layers. Now, let’s get the details of TCP and IP protocols.

TCP Protocol stands for Transmission Control Protocol. It is a connection oriented and reliable protocol. Connection oriented mean the connection remains established until the message has been exchanged and after the complete exchange of packet the connection is terminated. It has been put under the Transport layer. It is responsible for breaking of data messages in to packets that are sent by using internet protocol. TCP is also used in remote login i.e. one can get access of the other computer for maintenance or trouble shooting purposes. It is also used in file transfers.

The message that is in bytes (form of 0 and 1) is broken up into chucks which are known as segments. After receiving the segments, the receiver send acknowledgements for segments. TCP also maintains a timer. If the acknowledgement is not received in time, then the message is resent. Each byte that is transmitted through TCP protocol contains a sequence number. A TCP segment is made up of a segment header and a data section. The header contains 10 fields that must exist and an optional extension field. TCP provides the following facilities:-

1. It groups the bytes in TCP segments and then passes them to IP.

2. With the help of acknowledgments, it provides a greater reliability.

3.The flow of bytes transfer can also be informed with the help of acknowledgements that are sent by the receiver to the sender.

4. It allows multiplexing which means that many processes within a single host can use the facilities of TCP communication.

5. It provides a full duplex mechanism which means that the data can be transferred in both directions at the same time.

IP protocol stand for Internet protocol and it deefines the addresses that are necessary in order to send the data from the source to the destination. It was developed in the 1970s. IP address is used for providing the unique address for computers on a network. As the address is unique it can be used as an identifier to be connected to the other computers.  Data is organized into packets also known as datagrams and each IP datagram contains the header and message data. IP protocol makes use of end to end principle in its design and therefore, the system is considered to be unreliable at any single network element or transmission medium. In absence of any central monitoring, the network tends to be 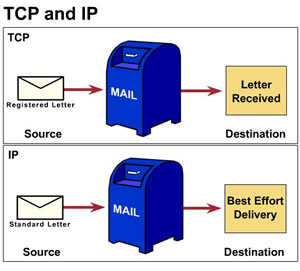 It is a connectionless protocol and it is prone to various error conditions like data corruption, packet loss, duplication and out of order delivery. Connectionless refers to the arrangement where the sender sends the data without determing the availability of receiver. Even if receiver is available, the receiver might not be ready to receive. Situations like this may lead to various problems. However, TCP/IP refers to the combination of TCP and IP protocols.

Some of the key differences have been listed in the table below:-