Difference between Tides and Waves

Key Difference: Tides are the rise and fall of sea level that is caused by the gravitational pull of the moon and the sun on the Earth. Waves are actually energy that moves across the surface of the water. In the scientific community, this is more commonly known as wind waves as these waves are generated by wind.

Tides and Waves are two types of natural phenomena that occur on water and are similar in nature; hence a lot of people can confuse the terms to mean the same thing. Though, both of these are related to bodies of water, such as oceans and seas, they differ from each other. 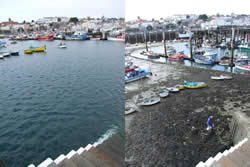 Many shorelines experience two high tides and two low tides daily, this is known as a semi-diurnal tide. Shorelines can also experience one high tide and one low tide, known as diurnal tide. A shoreline experiencing two uneven tides is known as a mixed tide. The tides are affected by a number of factors such as the alignment of the sun and the moon, by the pattern of tides in the deep ocean, by the amphidromic systems of the oceans, and by the shape of the coastline and near-shore bathymetry.

As the moon rotates around the Earth, its gravitational force creates a wave beneath the moon that moves across the Earth, on the opposite side of the Earth another wave forms; these are known as high tides, between two high tides are two low tides. When a new moon of a full moon occurs, the Earth experiences the combined gravitational force of the sun and the moon causing high tides to be very high and low tides to be very low, this is called as a spring tide. During the moon’s quarter phases, the moon is at a right angle to the sun, causing the waves to cancel each other out; this is called as a neap tide. 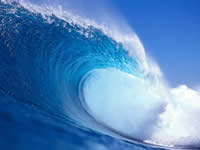 Waves are also encountered on shore lines; though we also come across it in physics in forms of energy (ex: radio waves, sound wave). Similar to that, waves are actually energy that moves across the surface of the water. In the scientific community, this is more commonly known as wind waves as these waves are generated by wind. These waves occur on the free surface of oceans, seas, lakes, rivers, and canals or even on small puddles and ponds. There are three types of waves, capillary waves or ripples, seas and swells.

A wave’s size and shape can reveal the origins of the wave. While a small, steep and choppy wave may suggests that it was probably formed by a local storm, a large, stead wave which high crests and that plunges into foam suggests that it came from far away, may be from a storm in another hemisphere. According to meteorologists, no two waves are the same, though they may share the same characteristics. Each wave differs in height, and the distance from its crest (high point) to its trough (low point). Various factors that shape a wave are wind speed, duration, fetch or the distance it blows over open water, width of the area that is affected by the fetch and the depth of the water.

The height of the wave decreases as the wind dies and as it reaches the shore, the back of the wave overtakes the front and it tumbles onto the shore, this is known as breaking. Though waves can be small and delightful, the intensity of the wave can be just as powerful. Depending on conditions, a wave can range from a 2 feet in height to over 90 feet. Powerful waves that are caused by factors such as underwater earthquake, landslides or volcanic eruptions are known as tidal waves or Tsunamis.

As you can see, tides and waves are completely different. They form under different conditions; they are caused by different factors and they hardly even resemble each other. Waves are much more noticeable compared to tides. Tides can most commonly be been seen on the sea shores; when some days less sand and more water is visible, the other days water seems to recede into the ocean and more sand is visible. Waves are also much easier to measure compared to tides.

I will immediately grab your rss as I can not in finding your email subscription hyperlink or newsletter service. Do you've any? Please allow me know in order that I may subscribe. Thanks.