Difference between Who and Whom

Key Difference: The term ‘who’ is primarily used to refer to a person and is used a question to ask about that person. It may also be used to give further information about a person, typically one that has been previously mentioned. Whom is a more archaic use where it is used instead of ‘who’ as the object of a verb or preposition. 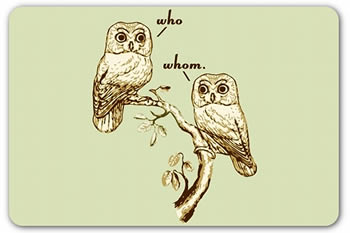 Who and Whom are very similar in nature and are in fact use in that way as well. However, it should be noted that they are two different words and hence are used in specific instances.

Who is the more common of the two, and is used nearly everywhere. The term is primarily used to refer to a person and is used a question to ask about that person. For example: Who is that? Who are you going with to the party? In both instances, the question is inquiring about a person that the speaker does not know, and hence is inquiring about them.

The term ‘who’ may also be used to give further information about a person, typically one that has been previously mentioned. For example: John is the one who won the award. Here the speaker knows that they are talking about John, hence they do not need to inquire about that person. Instead they are using the term to introduce a second clause, in this case ‘won the award’ in context of a person who was previously mentioned before, i.e. John.

Consider the following example, which show both the examples of who: Who is Mary? She is the one who is singing. The first part is seeking to identify Mary, whereas the second sentence identifies Mary via the use of a secondary clause which indicates what she is doing.

Whom, on the other hand, is very similar to who. It is used in a similar manner but in a different context. It can be used as a replacement to who, in particular instances, such as when who is used as an object of a verb or preposition. For example: ‘Whom did he marry?’ ‘To whom am I speaking?’ In these instances, the term ‘whom’ indicates a person as the object of a verb. In the first instance, someone is marrying this person, whereas in the second they are speaking to them.

It can also be said that ‘who’ is used primarily as the subject in the sentence, whereas whom is used primarily as the subject. For example: Who is going? Whom is she going to meet? Here in the first instance, who is doing the action, i.e. in this case going, whereas in the second instance, whom is the subject, she is going to meet to whom, i.e. an action is being done to whom. Here, the difference is similar to I vs me, he vs him, she vs her, etc., where I, he, and she at as subjects, whereas, me, him, and her are objects. 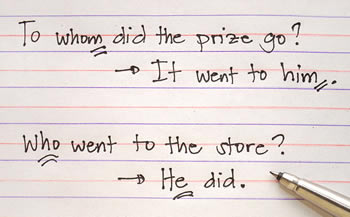 Hence the easy way to distinguish between who and who is to find out whether he or him will fit into the sentence. For example: Who is speaking? He is speaking. Him wouldn’t work in this sentence, hence whom will be wrong. Similarly, I should give this to whom? I should give this to him.  Since him works in this sentence, whom works in this instance; using he and who would seem incorrect here.

It should also be noted that while each one, i.e. who and whom, play a distinct role, today, in most instances, whom can easily be replaced by who, while not changing the context of the sentence, for example, ‘Whom are you going to meet?’ can easily be changed to “Who are you going to meet?” Both sentences mean the same thing and nothing has change. Hence, a lot of people are now using who in both instances in order to avoid the confusion between who and whom. In fact, people are now relying on ‘who’ so much that the usage of ‘whom’ is actually becoming archaic, i.e. not in common use anymore.

Comparison between Who and Whom: