Difference between Kidney and Liver

Key difference: Kidneys and Livers are the filtering and urinary systems of the body. Kidneys play an important role, in the excretion of waste and re-absorption of the ions, glucose and other vital substances of the body; while the Liver is responsible for the detoxification and production of proteins and enzymes, required for the digestion of the body.

The Latin term ‘renes’ is related to the English word ‘reins’, which is a synonym for the kidneys in Shakespearean English. The word ‘renal’ refers to the kidneys. 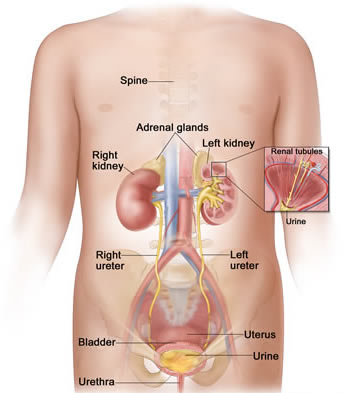 Kidneys are in a pair, and are located at the renal rear of the abdominal cavity in the retro peritoneum. In humans, the kidneys are located in the abdominal cavity, more specifically in the paravertebral gutter and lie in a retroperitoneal position at a slightly oblique angle. As they are in pairs, each is located on each side of the spine. The right kidney is slightly lower than the left and it is situated just below the diaphragm and posterior to the liver, whereas the left kidney is situated below the diaphragm and posterior to the spleen. Each adult kidney, weighs between 125 and 170 grams in males and between 115 and 155 grams in females. The left kidney is usually slightly larger than the right kidney. A kidney is approximately 11–14 cm in length, 6 cm wide and 4 cm thick. Structure wise, each kidney has a convex and concave surface. The superior border of the right kidney is adjacent to the liver and the border of the left kidney is adjacent to the spleen; hence they both move down on inhalation.

Renal physiology is the study of kidney functions, whereas the Renal histology studies the structure of the kidney, which is viewed under a microscope. Various distinct cell types occur in the kidney, including:

Kidneys are those organs, which facilitate various functions involved in the regulation of the body. They are primarily essential in the urinary system and also play an important role in the homeostatic regulation of the electrolytes. They serve as a natural filter for the blood, and remove wastes, which are further diverted to the urinary bladder. They maintain the acid-base balance, and regulate the blood-pressure. While producing urine, they excrete the wastes products, such as urea and ammonium; and are also responsible for the re-absorption of water, glucose, and amino acids. They produce the hormones like calcitriol, erythropoietin, and the enzyme rennin. The kidneys receive blood from the paired renal arteries, and drain into the paired renal veins. Each kidney excretes urine into a ureter, a paired structure that empties into the urinary bladder.

Nephrology is the medical specialty concerned with kidney diseases.  The kidney diseases are diverse in nature, depending upon the different characteristics of an individual. Common clinical conditions involving the kidney include the nephritic and nephrotic syndromes, renal cysts, acute kidney injury, chronic kidney disease, urinary tract infection, nephrolithiasis, and urinary tract obstruction. Various cancers of the kidney exist; the most common adult renal cancer is renal cell carcinoma. Cancers, cysts, and some other renal conditions can be managed with removal of the kidney, or nephrectomy. The most common problem kidney stone removal problem involves ultrasound treatment, which break the stones into smaller pieces, and pass them through the urinary tract. The other kidney treatments are dialysis and kidney transplantation.

The Greek word ‘hepar’ or ‘hepat’ stands for ‘liver’. 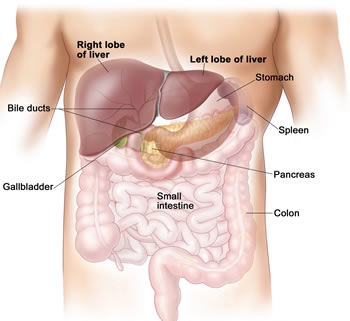 Livers are reddish brown organs with four lobes of unequal size and shape. They are located in the upper right-hand portion of the abdominal cavity, beneath the diaphragm, and on top of the stomach, right kidney, and intestines. Lobules are the functional units of the liver. The two major types of cells populate the liver lobes: karat parenchymal and non-parenchymal cells. The human liver normally weighs 1.44–1.66 kg (3.2–3.7 lb) and is a soft, pinkish-brown, triangular organ. It is considered to be both, the largest internal organ as well as the largest gland.

Liver is the most vital organ present in vertebrates and some other animals. The liver performs various functions such as detoxification, plasma protein synthesis, and the production of biochemical’s necessary for digestion. It plays a major role in the metabolism of food and drinks. It also serves the functions of glycogen storage, decomposition of red blood cells and hormone production. It is responsible for the production of bile, which is an alkaline compound. The bile aids in the digestion via the emulsification of lipids. The liver's highly specialized tissues regulate a wide variety of high-volume biochemical reactions. This includes the synthesis and breakdown of small and complex molecules necessary for normal vital functions.

As the liver is the most important organ of the body, and as it performs various functions it is prone to many diseases. The most common among them are the: infections such as Hepatitis A, B, C, D, E, alcohol damage, fatty liver, cirrhosis, cancer, drug damage (particularly by acetaminophen (paracetamol) and cancer drugs).  Many diseases of the liver are accompanied by jaundice, which is caused due to the increased levels of bilirubin in the system. The other pediatric liver diseases includes: biliary atresia, alpha-1 antitrypsin deficiency, alagille syndrome, progressive familial intrahepatic cholestasis, and Langerhans cell histiocytosis. The liver diseases are generally treated with the liver boipsy method and liver transplantation. Nowadays, advanced techniques have also evolved for the treatment of liver problems. These include the artificial liver transplantation technique and the radiation techniques.

Comparison between Kidney and Liver: