Difference between a Hydrogen Bomb and an Atomic Bomb 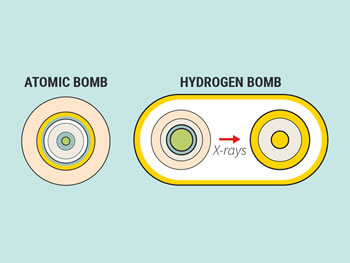 The term Atomic Bomb or atom bomb tends to make people nervous and even scared, and with good reason. It is a devastating device that can kill millions of people in one go, and can level a whole city within seconds, not accounting for the years of radioactive radiation it leaves behind. It is not a power that anyone should have over someone else.

Both are types of nuclear weapons, also colloquially known as weapons of mass destruction. Both are capable of great destruction; however they differ in the manner that they react in order to bring about this said destruction. The atomic bomb is a type of fission based nuclear weapon, which basically means that it uses a fission reaction to create heat and energy. Here, the energy is created by assembling enriched uranium or plutonium into a supercritical mass and then by either by shooting one piece of sub-critical material into another, which is called the gun method, or by compressing using explosive lenses a sub-critical sphere of material using chemical explosives to many times its original density, which is known as the implosion method. The implosion method is used only with plutonium and does not work with uranium. For uranium, the gun method is more popular.

The energy from fission reaction is used to compress and heat fusion fuel, which mostly consists of hydrogen isotopes, primarily tritium, deuterium, or lithium deuteride. These isotopes are placed in proximity within a special, radiation-reflecting container. The gamma rays and X-rays which are expelled from a fission reactions force the hydrogen isotopes to compress, thus creating enormous numbers of high-speed neutrons, which can then induce fission in materials not normally prone to it, such as depleted uranium. Hence, it can be said that the fusion reaction is in two stages. The primary one is the fission bomb, whereas the secondary on is the fusion capital.

In comparison, Hydrogen bombs are much more powerful than atomic bombs and can result in a much larger destruction than just an atom bomb. Also, while atomic bombs have been around for a while, at least since the 1940s, the hydrogen bombs were developed much later. Through there are successful hydrogen bombs out there, they have never been used in a war, whereas the Atomic Bomb has been used twice, and both times in World War II.

Comparison between a Hydrogen Bomb and an Atomic Bomb: