Key difference: Navratri, Durga Puja and Dussehra are Indian Hindu Festivals. ‘Navratri’ is a nine day festival, in which ‘Durga Puja’ is celebrated as one of its days, which is followed by all the rituals and traditions in the respective part of the country, while, the day after Navratri is considered and celebrated as ‘Dussehra’.

In the Indian culture, Navratri is a full nine day festival, celebrated with all enthusiasm including the different forms of arts and dances. Accordingly, it comprises the goddess Durga’s Puja which is conducted on the ninth or eighth day differing according to the culture, but probably it is widely celebrated in the northern part of the country, while Dusshera is considered as the day when Ravana was killed; the same day is also said to depict the victory of goddess Durga over the wicked demon Mahishasur.

The days of Navratri are followed and conducted accordingly; 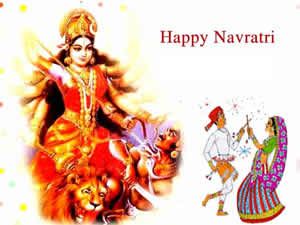 The word ‘Navaratri’ means 'nine nights' in Sanskrit, ‘nava’ meaning nine, and ‘ratri’ meaning nights. It is a festival dedicated to the worship of the Hindu deity Durga. The festival is celebrated in almost all parts of the country, but specifically observed in the states of Gujarat, Bengal, Maharashtra, and some states in South India . The festival lasts ten days and nine nights, which are celebrated in order to worship the nine forms of Goddess Shakti/Devi. It is a major festival which is celebrated with great zeal all over India. Navratri is also known as ‘Navadurga Parva’ which happens to be the most auspicious and unique time of dedicated devotions (‘sadhanaas’), while worshipping to Goddess Shakti. The festival characterizes the end of evils, and the beginning of new and pure divinity. Its concepts are observed and followed from Vedic times, from when it is celebrated as a sign of divineness towards the Mother Goddess Durga. The festival is celebrated with all fun and enthusiasm, which specifically comprises of the Indian dance forms like ‘dandiya’ (a two sticks dance form) and ‘garba’ (a rhtymic claps form). 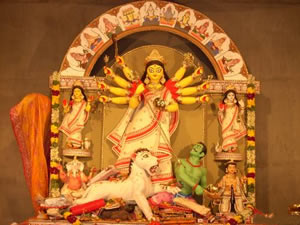 Durga Puja is the ‘worship of Goddess Durga’; it also refers to Durgotsava in state of Bengal, India. As the beginning of spring and autumn are considered the important junctions of climatic and solar influences, these two periods are taken as sacred opportunities for the worship of the Divine Mother Durga. It is a form of Puja (a way of worship and devotion to Goddess) majorly observed in Bengal and the southern part of India. The dates of Durga Puja celebrations are set according to the traditional Hindu calendar. The Durga Festival marks the epic of victory of Goddess Durga over the evil demon Mahishasura. Hence, the festival resembles the victory of 'Good over the Evil'. The Puja is widely celebrated in the Indian states of Assam, Bihar, Jharkhand, Manipur, Odisha, Tripura and West Bengal, where it is a five-day annual holiday. Besides these states, the festival is also celebrated in Delhi, Uttar Pradesh, Maharashtra, Gujarat, Punjab, Kashmir, Andhra Pradesh, Karnataka and Kerala. It is also appreciated and celebrated as a major festival in Nepal, wherein 91% is Hindu population. Nowadays, with the Indians residing in almost all parts of the world, the festival is celebrated with the same enthusiasm and fun in countries like United States, Canada, United Kingdom, Australia, Germany, France, The Netherlands, Singapore and Kuwait. 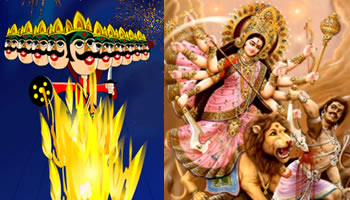 Dussehra is also known as Vijayadashami, Dasara, Dashahara, Dashain (in Nepal). It is the tenth day, i.e. the instant day after Navratri, resembling the beginning of pure aura and powers. The name ‘Dussehra’ (Sanskrit Dasha-hara) derives the meaning as, “the sun will not rise”, where Dasha resembles to sun and Hara means defeat. This epic refers to Lord Suraj's victory over the ten-headed demon king Ravana. The name is also derived from Sanskrit Dasha + Ahaha = Dasharahaha = Dasharaha. Ahaha means day. The day also marks the victory of Goddess Durga over the demons Mahishasur. It generally falls in the month of Ashwin, according to the Hindu lunisolar calendar which corresponds to September or October in the Gregorian calendar. The day is celebrated in many different ways and styles, depending upon the rituals and cultures of the people.

The festives Durga Puja, Navratri and Dussehra mark the culture and tradition of Indian society. These are followed and celebrated every year with same enthusiasm among the people. In the modern era, these have been celebrated with new thoughts and systems. Along with the celebration, these festivals bring people together and help them exchange their views and ideas. New blend and modern thoughts are also equipped in the festival; youngsters too contribute in majority especially in the Navratri festival. People facilitate and greet each other with colorful greetings and posters. Modern traditions include the display of decorated pandals and artistically depicted idols (murti) of Durga, exchange of Vijaya greetings and publication of Puja Annuals. These celebrations are not only bounded in India but also appreciated in other countries of the world in order to celebrate and share the enthusiasm among people.

These festivals is also celebrated in jharkhand and Bihar.

Navratri is celebrated in honor of Goddess Durga for nine consecutive days in India.