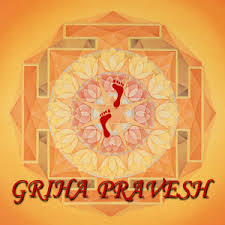 These are basically ceremonies held on the occasion of one’s first entry into a new house. An auspicious day is decided by a Hindu priest. He calculates this day be analyzing the astrological chart. This has been a very old practice and has been practiced since the Vedic times. This ceremony is conducted in order to please gods and get their blessings. It also indicates avoiding the negative forces.

According to ancient Holy Scriptures, there are three types of GrihaPravesh that can take place –

VastuShanti is one of the two main essential ceremonies included in GrihaPravesh. The other one is called Vastu Pooja. In vastu shanti, a havan or homa is performed for creating a peaceful environment and also restraining the negative force. The word ‘Vastu’ is actually an ancient vedic science based on spatial arrangement, like Feng Shui. It deals with influences of the environment and thus it tries to balance and harmonize all aspects of environment. It starts with the pooja (prayer) of fire god.

It is a worship of deity of direction as gods. It also worships the five basic elements of nature which are Aakash(Sky), Vaayu(Wind), Paani(Water), Agni(Fire) and Pruthavi(Earth). It rectifies if there are any tyes of defects related to Vastu in the space. Some special mantras are chanted along performing a Hom Havan. It  is an elaborated ceremony and may take even about half of day.

Grah Pravesh ceremony is celebrated with family and friends where an arrangement of food is also made. Sometimes, special invitation cards are also used to invite guests.