Difference between Hippopotamus and Rhinoceros

Key Difference: Hippopotamus is a large and herbivorous semi aquatic animal which belongs to the Hippopotamidae family of class Mammalia. Rhinoceros is a large, heavy, herbivorous odd-toed ungulate which belongs to the Rhinocerotidae family of class Mammalia. They both differ in numerous characteristics; however the most distinctive feature of a Hippopotamus is that its ears, eyes and nostrils are present on top of the head. On the other hand, Rhinoceros possess distinctive features like hard, thick skin and presence of one or two large horns. 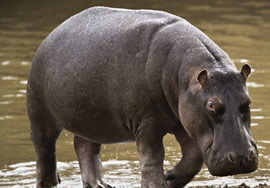 Hippopotamus (hippo) is an animal that appears like an elephant. It is a native of warmer places and is mainly found in the middle parts of Africa. As Hippos fall under the category of semi-aquatic mammal, they generally inhabit shallow lakes, river and swamps. They have an extremely large, fat and round body. A male generally weighs from 1.5 to 3.2 tons (3,000 to 6,400 lbs) whereas a female can weigh from 1.4 to 2.5 tons (2,800 to 5,000 lbs). They possess short legs and a short tail. They can swim with the help of partly webbed toes. They have bulging eyes and short ears. One can be surprised by knowing that an adult hippo can stay under water for five to six minutes.

Generally, they stay in a colony comprising of 30 to 100 individuals. It consists of single male and many females along with the young ones. Hippos are herbivorous. 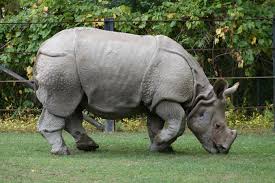 On the other hand, Rhinoceros (Rhino) is also a massive and powerful animal. It belongs to any of the genera - Rhinoceros, Atelodus, and several allied genera of the family Rhinocerotidae. They are usually found in Southeast Asia and Africa. They have a very thick skin disposed in plates and folds, and also have one or two stout conical median horns on their snout. Like Hippopotamus, it is also an herbivorous mammal. All the species of the Rhinoceros family weighs nearly one tons or even more. They have a relatively small brain (400–600 g). There are five species of this mammal that are found in the world. Out of these five, three species are regarded critically endangered. The five species of Rhino includes the White Rhino, Black Rhino, Indian Rhino, Sumatran Rhino and the Javan Rhino. It is regarded as the second biggest land mammal in the world.

They have an excellent hearing power, but poor eyesight. They are herbivores but still they are known to be very aggressive in nature. Rhinos are killed for their precious horns by the poachers. These horns are made up of keratin.

Comparison between Hippopotamus and Rhinoceros: