Difference between Process and Thread

Key difference: Thread and Process are two closely related terms in multi-threading. The main difference between the two terms is that the threads are a part of a process, i.e. a process may contain one or more threads, but a thread cannot contain a process.

In programming, there are two basic units of execution: processes and threads. They both execute a series of instructions. Both are initiated by a program or the operating system. This article helps to differentiate between the two units. 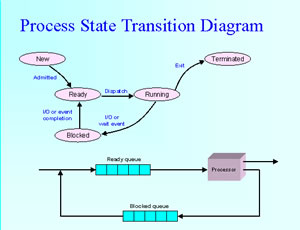 A process is an instance of a program that is being executed. It contains the program code and its current activity. Depending on the operating system, a process may be made up of multiple threads of execution that execute instructions concurrently. A program is a collection of instructions; a process is the actual execution of those instructions.

A process has a self-contained execution environment. It has a complete set of private basic run-time resources; in particular, each process has its own memory space. Processes are often considered similar to other programs or applications. However, the running of a single application may in fact be a set of cooperating processes. To facilitate communication between the processes, most operating systems use Inter Process Communication (IPC) resources, such as pipes and sockets. The IPC resources can also be used for communication between processes on different systems. Most applications in a virtual machine run as a single process. However, it can create additional processes using a process builder object. 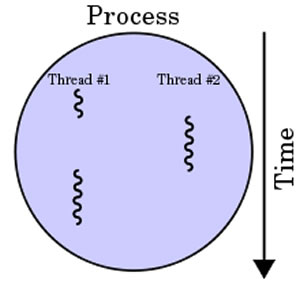 In computers, a thread can execute even the smallest sequence of programmed instructions that can be managed independently by an operating system. The applications of threads and processes differ from one operating system to another. However, the threads are made of and exist within a process; every process has at least one. Multiple threads can also exist in a process and share resources, which helps in efficient communication between threads.

On a single processor, multitasking takes place as the processor switches between different threads; it is known as multithreading. The switching happens so frequently that the threads or tasks are perceived to be running at the same time. Threads can truly be concurrent on a multiprocessor or multi-core system, with every processor or core executing the separate threads simultaneously.

In summary, threads may be considered lightweight processes, as they contain simple sets of instructions and can run within a larger process. Computers can run multiple threads and processes at the same time.

Comparison between Process and Thread:

please give the real time examples of thread and process.

full size is not showing

Difference is not clear