Difference between Ebola and Lassa Fever

Ebola and Lassa fever are both types of viral hemorrhagic fever caused by different viruses. Ebola is caused by the five different species of ebolaviruses. Lassa fever, on the other hand is caused by the Lassa virus. It can be said that Ebola is more dangerous as it has a higher risk of fatality, however it is more rare than Lassa fever, which affects up to 500,000 people annually, with a death toll of about 5000. Due to the high incidence rate of Lassa fever, it has become a major problem in Africa.

A major difference between Ebola and Lassa fever is the manner in which they are transmitted. The Ebola virus is mainly carried by fruit bats and can be transmitted through close contact with the blood, secretions, organs or other bodily fluids of the bat, or any other animal/person it may have infected. Ebola can also spread through direct human to human contact or with infected surfaces and materials.

Lassa fever, on the other hand, is carried by the Natal Multimammate Mouse, which is indigenous to most of Sub-Saharan Africa.  It can be transmitted by eating the rat or by eating something contaminated by the rat’s feces. It can be further spread through person to person contact and through air borne particles, which facilitates a wider and faster spread of the disease. 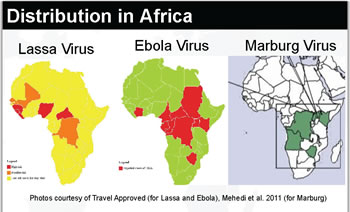 The symptoms of the two diseases are somewhat similar, but mainly differ. The symptoms of Ebola include fever, severe headache, joint and muscle aches, chills and weakness. As the patient deteriorates, the symptoms may also include nausea, vomiting, diarrhea, bloody stool, red eyes, raised rash, chest pain and cough, stomach pain, severe weight loss, as well as internal and external bleeding. Whereas, the symptoms of Lassa fever include high fever, sore throat, cough, eye inflammation (conjunctivitis), facial swelling, pain behind the breastbone, back pain, abdominal pain, vomiting, diarrhea, and general weakness that lasts for several days.

Diagnosing the illnesses is another matter in itself. The diseases are often diagnosed as something, which delays the treatment process. Diagnosing requires the ELISA test to check for the presence of viruses and/or the antibodies for that virus. Even after diagnosing, there is no cure, nor vaccine to prevent the disease. At most, the doctors can treat the symptoms of the disease, in order to give patients a better chance to fight off the disease be themselves. This is okay in the case of Lassa fever which only has a fatality rate of 20%, allowing 80% of patients to recover, however Ebola kills between 25% and 90% of its patients, with the average being 50%.

Comparison between Ebola and Lassa Fever: